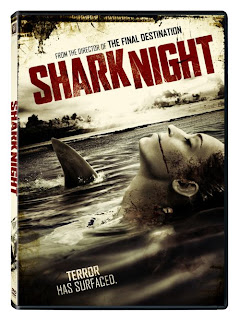 I rarely make the whole family sit down and watch a movie but for Shark Night I made an exception. I know you must be thinking “B” why would you unleash that kind of torture upon your family? Because my family appreciates a good B-Horror flick and that’s why I love them. We try to watch serious films together but it really does not work (one of us always begins talking over the movie because we get impatient or hate the movie). A film like Shark Night breeds family discussion about jumping sharks, severed arms, and B-Horror film theory.

When 7 college friends pack their swim suits for a weekend of fun-in-the-sun activities at there friend Sara’s lake house, they think it will be the perfect vacation. But the tables immediately turn when the lead football star, Malik, gets his arm ripped off during a water skiing accident. While the friends are to believe his wound was a freak accident, they soon come to discover that there was a primal attack involving a shark. Now while they think that one shark is no problem, they soon come to the realization that 15 species of sharks are lurking in the water, and with no form of boat or transportation, and no signals for phone’s, the group of seven now face a fate they would never imagine. Being fed to these sharks by crooks for real life footage on an Internet website.

Is Shark Night a bad movie? It depends how you look at it. If you pick up a movie called Shark Night and expect an Oscar worthy picture, you must be slow. If you take Shark Night as it is (a hard pg-13, side boob loving, light on gore, midnight movie), you just may fall in love. I cheered for the one armed Malik as he punched a shark in the head. Yes the film is a bad combination of Jaws and teen slasher but that is also what it has going for it too. Also, Shark Night isn’t just a man-versus nature monster movie; it’s also a rednecksploitation horror tale. This film is pure film geek guilty pleasure from start to finish.

Genre fans will wet their swim trunks during this one. I laughed and yelled at the screen a few times, I cheered for the sharks, and clapped during explosions. This was definitely a fun little genre film. But if you are not into that (if you know what a mega sharktopus is you will like Shark Night) skip this.

is now available for purchase for home viewing