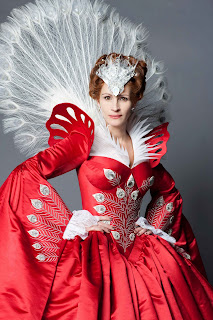 Mirror Mirror is heading to theaters on March 16th. This new twist on the old tale of Snow White and the Seven Dwarves, the crew of little people and the beautiful Snow White are on a mission to reclaim their kingdom (which had been destroyed).

When an evil queen steals control of Snow White’s kingdom, the exiled princess enlists the help of seven resourceful rebels to win back her birthright. Mirror Mirror is a spirited adventure comedy filled with jealousy, romance and betrayal that will capture the imagination of audiences the world over.

Starring Julia Roberts as the Queen, Lily Collins as Snow White, Armie Hammer as Prince Alcott, Sean Bean as the King and Nathan Lane as the Queen’s hapless and bungling servant, Brighton this star packed adventure is sure to please everyone.

Rescued by a band of diminutive highway robbers, Snow White grows into an indomitable young woman determined to take back her realm from the treacherous Queen. With the support of her subjects, she roars into action in an epic battle that blends spectacle, magic and contemporary humor in Singh’s signature, jaw-dropping visual style.

I just love movies that take a twist on classic tales, so this one is going to be on this broad’s must see list!