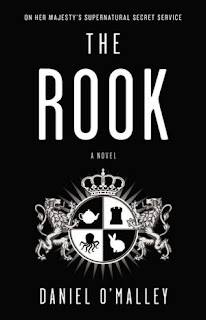 The Rook: A Novel

Percussive, enchanting, pop out of the box espionage with a frisson of sci-fi, The Rook by Daniel O’Malley is – SPLENDIFEROUS! The Rook is that rare novel that crash lands, flaps down, wings destroyed, belly-up, that reintegrates right onto the lap of the astonished reader. Absolutely original, witty, complex, captivating – The Rook soars. O’Malley’s Australian humor expands his debut novel into the best read of the year as he overrides the aura of genre! ~

Myfanwy (rhymes with Tiffany) Alice Thomas has been obliterated – literally – from her high profile administrator position in the Court, the highest level rulers of The Chequey, the secret agency that protects Britain and the world from supernatural forces. As oracles tell her of her oncoming obliteration by a mole in the Court itself, Myfanwy prepares for the worst. The prophecy says that she will lose her memories and personhood, and her body will be taken over by a stranger. Frantically, she writes a plethora of letters detailing every detail of her life, her position and duties at The Chequey, its member’s lives, and warnings for the person who might assume her brain empty body. The oracles prove valid.

A woman wakes up in a park in a torrential rain surrounded by dead bodies – all wearing latex gloves. She is beaten and bruised, and has no idea where she is. She reaches into the pocket of her jacket and finds two letters – from Myfanwy Alice Thomas with instructions detailing The Stranger’s options, which amount to only a few. The Stranger can carefully take a cab to a certain bank and open a certain lockbox with enough money and identification to go anywhere and live the good life. OR she can assume Mcfanwy’s life and find the person in the Court who has destroyed her. The letter warns her that her life is in grave danger either way. The Stranger decides to open Box A – the new life with money box. When she arrives at the Bank she is attacked by 3 people with latex gloves. And she finds she has Myfanwy’s superpowers. She can attack people with her mind. She decides to open Box 2 – and become Myfanwy, as she looks at the 3 unconscious people and rage engages her body. For only people with superpowers can enter the ruling center of The Chequey, The Court (which of course calls its members after chessmen).


Thus begins one of the strangest tales with a plot that roars. For Myfanwy Alice Thomas – the original and the new – is unforgettable, as are all great characters. She’s a touch of C.S. Lewis, a tad of Stephen King, a blink of RRR Tolkien, with a side of Wonder Woman. With a plot that simply never stops alluring, Myfanwy Alice Thomas is the character adjectives were made to describe.

As Myfanwy the New engages in the Court’s drama, she reads each letter that Myfanwy the Original has written to Dear You. As she trips every wire that the Court throws her, she rides from stalemate to check – and discovers the Judas within the Court. On the way, her journey fills and spills over with strange characters, devious and brilliant plot and a novel that cyclones its way into our brain and heart – a plot that simply lives off of its own creativity~ The absolutely stunning plot overrides Angels and Demons, The Shining and other “classics” with a wit that creates its own universe, engages the reader as he or she pulls for Myfanwy as she roars through the novel. A not to miss stunner on about 10 levels, and fun to boot, this reviewer will NOT reveal the page after page seduction of The Rook. Not to miss, this debut novel cannot be given any number! It’s unbelievably HOT!

Book of the Year Read


The Rook: A Novel

can be purchased at Amazon.com and other bookstores.