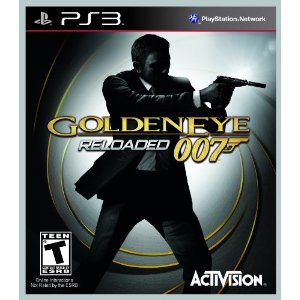 I spent 2 years of my life obsessed with GoldenEye on N64.  I have fond memories of being 13 sitting in my buddy Chris’s basement with about a dozen guys yelling at each other over this game.  An act the same guys do today with Call of Duty currently.  Now we can again with this game and it’s awesome online multiplayer.

The single-player campaign is also new and improved, with Daniel Craig’s voice as Bond.  There are upwards of ten hours of gameplay on the first play through, but as we all know from the original, half the fun is playing through again and again on harder difficulties.  I remember spending hours doing speed runs through the game seeing who could complete the missions fastest.  This was still fun to do here.

I really enjoyed how the campaign really let you have two different approaches to the game.  I’m more of a run and gun type of player who only uses stealth moves when necessary and the game presented that as an option just about everywhere.  It’s all up to you on how you want to take down your enemies. On more than a couple occasions I set off the alarm and brought attention to myself just to change things up and mow down the mindless goons as they tried to stop me.

The MI6 Ops Missions, exclusive to Reloaded, puts players in a sort of survival Horde mode. The AI is weak in MI6 Ops, but not enough to ruin the experience of taking down wave after wave of mindless henchmen.

Unfortunately, some a lot of the graphics were dull.  Maybe I’m just snobby from all those other great shooters but this felt kind of blah on the screen.  Compared to other current shooters this just falls flat, dated and bland.

I know what that the online modes is what is on everyone’s mind.  How is it you ask?  Fun.  Just like playing multiplier GoldenEye in Chris’s basement.  All of the maps are well designed the action is fast.  There was some lag from time to time.  I also had some trouble finding matches. This could have been my connection at the time or there were not many people playing when I was.

Overall this is the classic shooter that I loved as a teen.  It really is hard no to recommend this game.  So I will.  But just be warned the multiplayer was not as accessible as I hoped and the graphics were disappointing for a PS3.