You are here: Home / Fun / DVD Reviews: Rise of the Planet of the Apes 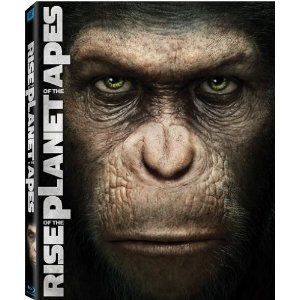 I’m not going to lie; I really have no interest in the original Planet of the Apes films.  I saw them as a child and I never really took to them.  I remember going to a friend’s house for a sleepover and watching the original as an adolescent none of us were taken with the film.  We turned it off after an hour and popped in Aliens a film that to this day still terrifies me.  I came into Rise with very low expectations and fortunately they were blown away.
At the story’s heart is Caesar, a chimpanzee who gains human-like intelligence and emotions from an experimental drug. Raised like a child by the drug’s creator, Will Rodman and a primatologist Caroline Aranha, Caesar ultimately finds himself taken from the humans he loves and imprisoned in an ape sanctuary in San Bruno. Seeking justice for his fellow inmates, Caesar gives the fellow apes the same drug that he inherited. He then assembles a simian army and escapes the sanctuary – putting man and ape on a collision course that could change the planet forever.
We should stop here and point out that Andy Serkis—who, though motion capture technology, gives real movement and expression to the otherwise computer-generated creation of Caesar—is brilliant and absolutely the soul of the film. He becomes a chimp, loping around on all fours, baring his teeth, and moving with that loose gait that’s so particular to primates. The uncanny valley hasn’t quite been crossed, but there’s something about Caesar that makes him this close to being totally believable. I think it’s his eyes; they convey the genuine depth of thought that’s so necessary to making Caesar a character we identify with and support.
This film gets a lot right—the special effects, the more realistic tone, Andy Serkis’ performance—but it’s hobbled by two things. First, the human characters (Franco and Pinto) are barely developed and almost completely trivial to the plot. This is partially intentional, I’m sure, as our sympathies are supposed to lie primarily with Caesar.  And I haven’t even mentioned his primatologist girlfriend, Caroline, simply because she doesn’t really do anything worth noting.
The whole movie looks and sounds great and the special features are fantastic too.
•         Audio Commentaries: The disc features two audio commentaries.
•         Deleted Scenes: See Andy Serkis running around in his badass motion-capture suit.
•         Mythology of the Apes: The filmmakers and stars talk about their respect for the original films.
•          The Genius of Andy Serkis: A celebration of Andy Serkis, who has almost single-handedly changed motion-capture technology.
•         A New Generation of Apes: The film’s creators discuss the technical innovations to make the film possible.
•         Breaking Motion Capture Boundaries: A good featurette about the golden gate sequence.
•         The Great Apes: A three-part documentary about apes.
Rise of the Planet of the Apes was a good flick.  I really am looking forward to watching it again.  There are rather minor quibbles in what is a thoroughly enjoyable film, which equals its CG-fuelled visuals with brains and genuine heart. A great start to what is hopefully an interesting franchise.

at Amazon.com and other retailers


Ratings are based on a 5-star scale
Overall:  4 damn dirty apes out of 5