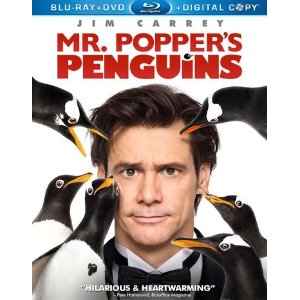 Damn – penguins are cute animals.  I really think they are awesome.  And while previews of this film looked terrible I thought that it can’t be that bad.  This film has so much going for it – Mark Waters (House of Yes, Mean Girls director), Sean Anders & John Morris (writers of the little seen Sex Drive and Hot Tub Time Machine), not to mention actors Angela Lansbury, Philip Baker Hall (he is excellent in everything), and the most consistent actress in Hollywood Carla Gugino.  This all leads to the question why does this movie fail? First we deal with the synopsis!
Mr. Popper’s Penguins is a comedy about how the surprise appearance of a penguin at a New York businessman’s door turns his life completely upside down, while simultaneously teaching him an important lesson about the value of family. Mr. Popper is a real estate developer who lives in an exclusive apartment on Park Avenue, has his sights set on becoming a partner in his firm, and is an every-other-weekend father to his two children. A ruthless developer with no time for anything but business, Mr. Popper resolves to deal with his father’s parting gift of a penguin by getting rid of the annoying bird as quickly as possible. That process proves much more difficult than expected, even with the help of his ultra-efficient assistant Pippi, who speaks primarily in p‘s, and Mr. Popper soon winds up with six penguins. Even more unexpected is how markedly those penguins begin to affect the relationship between Mr. Popper and his children and how that change affects the rest of Mr. Popper’s life.
Unfortunately this flick resorts to the lowest of the low comedy.  I cannot stand animal poop jokes; I think they are cheap and unfunny (I have a rule if there are more than 3 animal poop jokes – I turn the movie off).  The film can be terribly obnoxious at times—you might be tempted to go out to the nearest zoo afterward and verbally harass the penguins in retribution—but Mr. Popper isn’t the worst kid-flick to come out this year.  It’s well meaning and inoffensive—minus the gratuitous poop—and it’ll be passably entertaining for average eight-year-olds, however you will probably want to vacate the living room and find something else to do for 90-odd minutes.  I sent this movie to a few nieces and nephews for the holidays.
Fortunately all of the digital effects looked great on blu-ray.  Simply put, you get a sense that this is exactly how the film is intended to look. There’s no digital noise reduction, no halo-inducing edge enhancement, no over-the-top color grading—just an image that’s almost noiseless, naturally crisp, tonally balanced, and free from any overt compression artifacts.
Special Features-
•         Audio Commentary: Skipped it.
•         Nimrod and Stinky’s Antarctic Adventure: A short animated sequel.
•         Deleted Scenes: Twelve deleted scenes with optional commentary.
•         The Legacy of Mr. Popper’s Penguins: A brief backstory on the book.
•         Ready for their Close-up: The best and cutest feature of them all
•         Stuffy Penguin Theater: A short piece about how the filmmakers used stuffed penguins as stand-ins for the eventual CGI creations.
Mr. Popper’s Penguins is ultimately one of those forgettable family comedies parents patiently sit through, hoping their kids are having a fun time. It’s not terrible—you can’t dismiss it outright—but it’s not exactly inspired either.  Lets just hope Jim Carry does not do any more family movies.

can be purchased at Amazon.com and other retailers.


Ratings are based on a 5-star scale
Overall:  1 pooping penguin out of 5

« Book Reviews & Giveaways: The Whisperer
DVD Reviews: Rise of the Planet of the Apes »