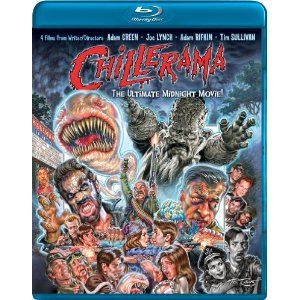 This movie just makes me happy. I absolutely love midnight movies and this feels like the mother of all midnight movies. While watching I felt that I was watching a Troma feature. A Jewish Frankenstein creation of Hitler’s? A Burlesque Strip dancing Statue of Liberty shaking its tits at a giant Godzilla sized fanged sperm…. Zombies… all manner of ridiculous absurdities. If you’re looking for a high budget Hollywood horror film, this film is definitely not for you. However, if you’re a fan of old school b-movie horror films from the 70s/80s or Troma you are so going to love this one.

The plot kind of goes like this: It’s the closing night at the last drive-in theater in America and Cecil B. Kaufman has planned the ultimate marathon of lost film prints to unleash upon his faithful cinephile patrons. Four films so rare that they have never been exhibited publicly on American soil until this very night! With titles like Wadzilla, I Was A Teenage Werebear, The Diary of Anne Frankenstein, and Zom-B-Movie, Chillerama not only celebrates the golden age of drive-in B horror shlock but also spans over four decades of cinema with something for every bad taste.

First up is “Wadzilla”, a homage to Fifties films about giant monsters created by atomic mutation that destroy a major city, “Wadzilla’s” most obvious reference is The Blob if the “blob” was a giant hungry sperm. “Wearbear” draws liberally from Sixties beach movies. In Wearbear a young man torn between the charms of Peggy Lou, a beach bunny who would happily surrender herself body and soul, and the darker allure of Talon, the leather-clad biker who sings like Elvis and has a Big Secret. It might seem impossible to top Mel Brooks in making fun of Hitler, but the Chillerama guys pulls it off in “The Diary of Anne Frankenstein”. In Green’s 1930s black-and-white parody, the name “Frank” has been shortened to conceal the family’s true origin, and the famous diary was forged to prevent the world from learning what the Third Reich really wanted from them: the secret to creating super-soldiers by reanimating dead tissue. The final interweaving section is “Zom-B-Movie” is absolutely amazing. This is filled with nuggets of fun for every movie fan. I am almost sure that there was not one line of dialogue written for Zom-B-Movie because it is all vocal references to ever film ever created.

All of the shorts look and sound great for the budget and there are plenty of special features:

• Directors’ Video Commentary: In addition to talking through the feature, Rifkin, Green, Sullivan and Lynch can be watched recording their commentary in the upper left hand quadrant of the screen. A good commentary not great

• The Making of “The Diary of Anne Frankenstein”: Primarily an extended interview with writer-director.

• “Wadzilla” Deleted Scenes: There are seven scenes, most are just extended scenes.

• “Zom-B-Movie” Deleted Scenes: I wish these were added into the movie

• Famous Monsters: the four directors discuss their influences and the origin of the project.

Overall this was a great way to spend a Friday night. John Waters would be proud so would Tarantino and the Troma crew. The film really deserves 4 NC-17 ratings because of the content but it is so fun that it’s impossible to take it seriously. I love it.

is on shelves NOW

Overall: 4 zombie’s having sex out of 5

« Book Reviews & Giveaway: The Drop
DVD Reviews: The Art of Getting By »