You are here: Home / Fun / DVD Reviews: Another Earth 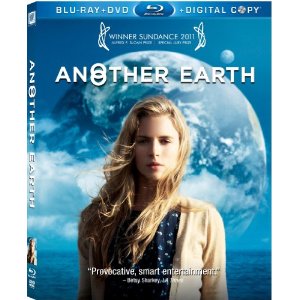 I think just about everyone looks up at the sky every so often and wonders what else is out there. Outer space is filled with so many unexplored territories that logically speaking there has to be intelligent life out there somewhere. Otherwise it’d just be a waste of space. Undiscovered planets and unimaginable life forms are only the half of it. What if there’s another planet somewhere in the cosmos similar to earth? Raising the stakes a bit, what if you and everyone you knew was also on that planet in addition to earth like an alternate universe that was right within our grasps? That is essentially what makes Another Earth the least bit interesting.
Unfortunately this very relatable idea is squandered with a painfully weak melodrama. Driving home drunk after a party, she hears about the new planet on the radio and cranes her head skyward, hoping to catch a view. Instead, she plows head-on into a family sedan waiting at a red light, instantly killing a wife and child. The husband and father, composer John Burroughs, is put into a coma, and Rhoda goes to jail for four years—the four years she would’ve spent at university. (Logic jump: Since Rhoda is a minor, John never learns who actually killed his family, even after he wakes up. This is the crucial fact upon which the entire story hinges.)   This plot line feels like an indie film cliché at this point  (Alfonso Gonzales Innaritu has used it twice.)
What saves the drama from being a complete overkill is the science-fiction plot line that runs parallel to dramatic struggle of the couple of protagonists.  Although none of the acting is very convincing and the cinematography is “Shaky.”  The budget did not call for a tripod.  Unfortunately the frenetic camera did not add to the movie it was used with no reason and made a 90-minute feature feel like a 3-hour one.  The silence in the film (and there’s a LOT of it) doesn’t tell us anything about Rhoda. Instead, it acts as a precursor to a lot of overly artsy shots that make you think about how much color correction they did in post. In fact, this entire film could run as a series of photographic stills— after all, it seems to care more about how pretty Earth 2 looks into the sky than the emotional struggles of the girl standing beneath it.
Special features did not help this one either.  We have a music video and some self-indulgent studio stuff that was not very helpful.  Unfortunately, Another Earth was not shot in true high def to create a grain and film noise.  What was accomplished with the camera was obviously ruined in post production color correction.
This film lacks the depth it so desperately attempts to flaunt. It comes off cheesy, pretentious, shallow, and self-obsessed. The characters pinball through the movie’s events and come out as empty as they started. The ones that do change do so without any real good reason. There’s no pleasure to be had in watching this film unless you absolutely love staring at empty, motiveless images (and characters) for long periods of time.
Another Earth

is available for purchase.

Overall:  No Rating – It sucked