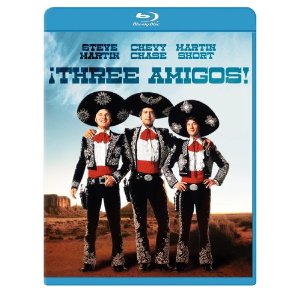 I grew up on Three Amigos, so it’s really hard to say anything bad. I have fond memories of watching over and over again on HBO with the family. It unfortunately is known as everyone’s second favorite cowboy comedy, Blazing Saddles. Three Amigos is a different type of comedy than most, it gets better with every viewing. I love the scene in which a German mercenary enters a really dangerous looking Mexican bar. The room is full of thugs and cut-throats who laugh at the German’s prim appearance and so he kills a few of them. He then instructs the rest of the patrons to be more respectful of strangers and to expect some friends of his to drop in later. The mercenary leaves and soon the Three Amigos arrive wearing camp looking Mexican costumes. It’s not long before they start to sing an extremely girly song to the patrons of the bar called “My Little Buttercup”. The song is accompanied by the most effeminate dance routine committed to film. The mystified bandits all assume the Three Amigos are the German mercenary’s friends and go along with the song and dance routine which after a while becomes so cute it makes you feel physically sick. This scene gets funnier and funnier with every viewing.

So the plot here is kind of secondary but here goes. When silent film stars Lucky Day, Dusty Bottoms and Ned Nederlander get fired, they take a job offer from Mexico: Doing a show with El Guapo, supposedly the most famous actor there. Traveling there in hope of getting good money, they arrive only to learn soon that El Guapo is not an actor, but a cruel gang leader suppressing people. He abducts the mayor’s beautiful daughter Carmen (to be his wife) in revenge for the people’s cry for help. Now, all hopes of the village folks rest on the weak shoulders of three minor-talented actors, who can’t just walk off the set this time.

The treat of this film is film’s villain El Guapo. El Guapo, may threaten rape and pillage, and he actually does order the destruction of a town, but he’s chiefly remembered for being vain about his age and quizzing his chief lieutenant about a “plethora” of piñatas. The set pieces also contain a lot of laughs. I will never forget the first time the Amigos camp out with the painted back drop and cardboard cactus.


The blu-ray looks really good and is a vast improvement over the DVD I have had for the past few years. The special features have a little bit to be desired. The real treat here is the booklet included with the Blu-Ray. The director and three stars reassembled for a light-hearted and informative interview about the making of the film, its reception and its afterlife. Photographs, both vintage and contemporary, are included. The deleated scenes are kind of weak here just a lot more of Joe Montagne. There is also a weak poorly mastered interview that was done just after production wrapped up.

Overall this is a great Blu-Ray at a great price. I get nostalgic about this move every year or too and I have I will be watching it more often because the Blu-Ray looks so good. The laughs are consistent the sets are hilarious, what more could I ask for? Highly Recommended.

Overall:  4 Pearl Handed Guns out of 5


We received product for our review. All opinions are our own.
« Wishing our online family
Health & Beauty Reviews: KINeSYS »