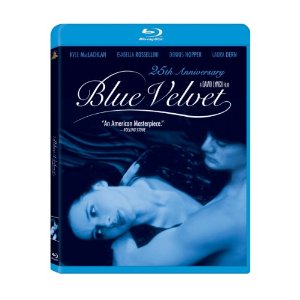 I am absolutely crazy for David Lynch’s material.  I really like his sense of humor and his pictures of the American status quo.  All of his films revolve at least in part around the conflict of what is perceived to be a rational and the more animalistic raging Id that underlies restrained personas.  I first was introduced to this film as a senior in high school after seeing Mulholland Drive.  Mulholland Drive at the time that I saw it was one of the most impressionable films I had ever seen.  I feel in love with Lynch’s surreal style and Blue Velvet is his masterpiece.
Returning home to visit his father who is in intensive care at the hospital, Jeffrey Beaumont stumbles upon a human ear he finds in a field. With local police detective Williams and the local police department unable to investigate, Jeffrey and Sandy, Detective Williams’s daughter decides to do their own investigation. But what Jeffrey and Sandy’s investigation leads them to discover that a dark underworld exists in their hometown. Jeffrey becomes suspicious of nightclub singer Dorothy Vallens, who is involved with Frank Booth, a violent and evil man.
It’s true that Blue Velvet’s dark mysteries have the power to repulse. Voyeurism, rape, torture, and murder are all key to the plot. Yet the film is also spellbinding in its beauty. Vibrant colors and ominous shadows offer gorgeous contrast – call it Technicolor noir – and the film is rife with unforgettable imagery. Moments big and small, from MacLachlan playing with a child’s birthday hat to Dean Stockwell’s show-stopping lip-synch of Roy Orbison’s “In Dreams”, are as haunting as anything you will see at the movies anywhere.
Blue Velvet may in fact not be an easy film to watch, and there are probably close to as many who abhor the film as those who are devoted fans, but there’s no denying that for better or worse it’s a film springing from the singular vision of someone who knows exactly what’s he’s aiming for and whose aim is frighteningly on target.
Through film school there was always a debate about the four-hour cut of this film.  It is one of the major extended cuts that film school kids geek out about (along with Apocalypse Now and The Keep).  This blu-ray reveals one of those missing hours of footage.  The special features here are amazing!!!!
Mysteries of Love – A nice long doc about the formulation of the project.  Love watching anything that has an interview of Lynch.
Newly Discovered Lost Footage – Holy crap…there are some very hard to watch moments here.   This is one of the most interesting collections of deleted scenes I have ever seen.
Outtakes – Wow some silly moments.
Siskel and Ebert “At the Movies” – hahahahahaha!!!!
Vignettes – A couple of great interviews here too.
Lynch’s off kilter sense of humor and often wickedly scabrous deconstruction of the suburban lifestyle fit in fairly well with my own somewhat cynical take on the very lifestyle in which I was being raised, and I’ve been a lifelong fan of Lynch ever since, even with films of his that have met with less than stellar response. A lot of people can’t stand Blue Velvet, and frankly I understand that sentiment.  But it’s my firm opinion that Lynch is going for more than mere shock value here. This is a finely crafted film that, yes, is unsettling and troubling, but which in its own unique way pries back the Leave it to Beaver perfection of perception and reveals something almost atavistic about the human condition.

is available for sale at retailers around the country.


We received product for our review. All opinions are our own.
« Book Reviews & Giveaway: The Impossible Dead
Book Reviews: The Hardline Self Help Handbook »