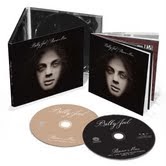 My family can make fun of me all that they want. I grew up on Billy Joel. As I recall, so did my husband, my friends, just about EVERYONE that I knew were fans of the self-proclaimed “Piano Man.” It’s odd, but I really hadn’t listened to his older work in a very long time, so I was excited to give a listen to this new 2CD set that includes the original Piano Man CD from ’73 (I was in college when it came out) and a 2nd one that with a LIVE recording of his infamous radio concert at Sigma Sound Studios in 1972….and I realized something. I STILL LIKE BILLY JOEL.

While I appreciated the original recording, what REALLY blew me away was the 2nd disc. This includes the recording of Captain Jack that really made him EXPLODE onto the music scene and hearing him play LIVE is so much better than ANYTHING he’s ever done in a studio. Billy Joel is and always will be a LIVE musician. That’s what he does best, it’s where his piano skills shine and you hear much more depth to his voice. He belongs before an audience.

“I never sat down and said I’m gonna write a hit record.  I wouldn’t know a hit record if it bit me.  I just wrote songs.  I wrote them for me, I wrote them for the band, or I wrote a song for the women in my life.  I was just writing songs for me. It’s music that I wanted to hear. If I didn’t hear certain kind of music on the radio, I realized, ‘Well, if I write and record this it’ll probably be on the radio and that’s what I’ll hear.’ That’s what I was thinking. Not so much about having hits, but about making music that I liked. I only really ever did it for me.  That may sound selfish, but I’m the only person that I really know all that well.” – Billy Joel

What I was even MORE excited about, was the fact that he’s also released The Complete Albums Collection

Diehard Billy Joel fans can order AUTOGRAPHED copies by Billy Joel if they order this $199 collection directly from the Official Billy Joel store.

& The Complete Albums Collection are available at both online as well as your local stores.