You are here: Home / Fun / Book Reviews: The Lost Photographs of Captain Scott 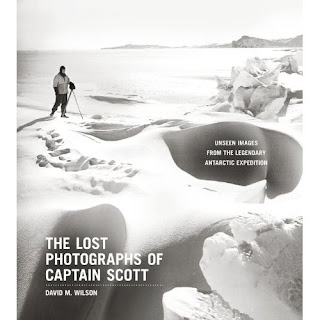 The disastrous Terra Nova expedition to the Antarctic led by Captain Robert Falcon Scott, wherein all men died, provides the perfect backdrop for the extreme climactic photographs that are finally in print. With photography at its early stages (taken in March of 1912), the phenomenal images of the Antarctic taken by Pointing and Scott show the vast tundras of snow, ice, and white-out whit conditions as well as the geological formations they discovered. this is all we have left of Captain Scott and his crew, buried somewhere in the Arctic in icy snow drifts of graves.

The fact that these photographs survived, in all their black and white glory, is a miracle. The negatives either disintegrated or disappeared. Since Captain Scott and his men lost the race to the South Pole to Roald Amundsen, and then Scott and his entire team perished on the way back, Scott’s expedition received little notice in 1912.

But if you languish for a moment in the journals of Scott and his men, and are swept up in the desolate yet beautiful photographs of a fatal world of ice cracks, snow, horrible conitions, ponies that were shot rather than suffer, and the dog camp, where the dog could not pull the sledge carts, you find yourself immersed in the world of brave men, and an Antarctic beauty that might speak of death – but also grandeur.


Not to be missed, this is unbelievably good.

is available for preorder from Amazon.com and will be available in stores beginning November 18, 2011.