You are here: Home / Fun / DVD Reviews: Winnie the Pooh 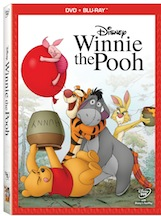 While I know that I grew up on Winnie the Pooh I have lost all memory of it. I remember being obsessed with Ghostbuster, Nintendo, Thunder-Cats, Transformers and even My Pet Monster. However I do not remember the Winnie years of my life that I understand every child has. After a call to my mother she confirmed that I was into Mr. Pooh. I would like to know why this did not leave as much of an impression on me as other things of my youth. I decided to give my inner child some love and try out the new Winnie the Pooh film.

During an ordinary day in Hundred Acre Wood, Winnie the Pooh sets out to find some honey. Misinterpreting a note from Christopher Robin, Owl convinces Tigger, Rabbit, Piglet, Pooh, Kanga, Roo, and Eeyore that their young friend has been captured by a creature named “Backson” and they set out to save him and find more honey.

Here’s the deal with this one…it’s great. This is the exact type of feature that I want my future children to be brought up on. I’ve watched a ton of animated features this year and last (this may be because of extended time spent with young family members) and this is one of the best. This little film contains so much heart, humor, and comedy that I don’t understand why it was not more popular. While the film was not as trans-generational or emotionally complex as Toy Story 3 its soul had the same effect. Not every animated film needs to shoulder the weight of the childhood experience, the fears of an unknown world, or the insecurities of growing up. Some just need enough love or honey. 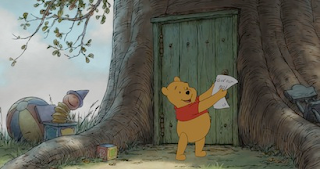 The film looks great on blu-ray and the watercolor effects help the viewer into the setting. All of the voice acting was fantastic. I have some serious kudos to Craig Furgison’s Owl it was spot on. My only complaint is Winnie the Pooh and Tigger’s voice actor seemed a bit too old for the role.

It was unfortunate how short the film was but it was appropriate for any attention span. There was no unnecessary plotting or side plotting or character development. The musical sequences were all fun and animated great.

There are great special features too:

• Winnie the Pooh and His Story Too: An overview of the origins and history of A. A. Milne’s Winnie the Pooh. Short but interesting.
• Deleted Scenes: Five deleted and alternate
• Bonus Shorts : “The Ballad of Nessie,” and “Mini Adventures of Winnie the Pooh: Pooh’s Balloon,” both are great highly recommended features.
• Disney Song Selection: Hop to each of the film’s songs
• Creating the Perfect Winnie the Pooh Nursery: Expecting?

Overall it is my children’s feature of the year so far. I know this movie will make no ripples in the film community or critical awards but it was just good clean fun and well worth the watch. Worth a nostalgic rental, or purchase if you have children.