You are here: Home / Fun / DVD Reviews: Pirates of the Caribbean on Stranger Tide 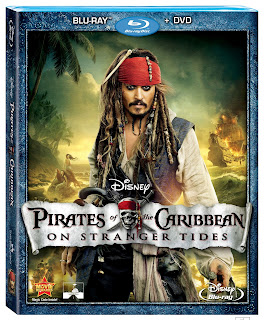 The Pirates films are great fillers.  I can put any of the first three movies on and enjoy them any time of day.  While they are not great films they are super entertaining.  I have so much love for Disney its ridiculous.  When there is a Disney logo on the cover you know that there will be redeeming qualities.  My wife to be will see anything that Disney puts out.   Disney did a great job with the first three films so I was very excited to revisit the universe that the first films set up.  My dad is a fan of the series too so I watched with him.

The OFFICIAL SYNOPSIS:
Johnny Depp returns as Captain Jack Sparrow in Pirates of The Caribbean: On Stranger Tides. A tale of truth, betrayal, youth, demise — and mermaids! When Jack crosses paths with a woman from his past (Penélope Cruz), he’s not sure if it’s love or if she’s a ruthless con artist using him to find the fabled Fountain of Youth. Forced aboard the ship of the most feared pirate ever, Jack doesn’t know who to fear more —Blackbeard (Ian McShane) or the woman from his past.
The plot of this film on paper sounds great (and I know this was a novel adaptation, but I have not read it).  The execution is complete off.  Almost all of the 136 minutes of this film does not work.  With the first three movies we had a main plot about Will Turner (Bloom) and Elizabeth Swann (Knightley) with Jack Sparrow (Depp) as a funny side character.  Let me rephrase that; Sparrow guides the characters.  While his character is fun it really is not enough to carry a film.  The viewer needs to see a character they can relate to.  The film does not give us a character to relate to until half way through the movie; too little too late, and this was only the second biggest problem.
My major issue with this film is the fact that it is so slow.  Everything about this film is slow, the pacing feels like they shot Dead Man’s Chest in the foot.  The film takes its time to set up.  This really hinders the experience.  We checked the run time after 30 minutes hoping to be closer to the end.  It feels over written and under delivered.  The action sequences were also slow.  The sequences just lacked any excitement and they felt flat.  There just was not much to get excited about.  Where is the storytelling of Curse of the Black Pearl? Adventure? The snappy dialogue? The thrills? The intrigue? The mystery? On Stranger Tides talks the talk (and talks and talks and talks but never steps up to the plate), it comes undone the moment a sword battle erupts.
The film comes with one of blu-ray’s best picture quality and soundtrack.  Also there are some excellent special features:
– Disney Second Screen: This syncs with your computer or ipad to show off some great special features and production art.
-Audio Commentary: I wanted an explenation on why this sucked so much.  But the filmmakers just pat themselves on the back as well as the actors.
– Lego Pirates of the Caribbean: A few scenes reenacted with Lego’s.
– Bloopers of the Caribbean: An outtake reel rounds out the features.
If it’s any consolation, Depp, Rush and McShane make the whole mess more tolerable.  All with great spins on the “gay pirate” (my favorite is still DeNiro in Stardust). On Stranger Tides isn’t a breath of fresh sea air that the previous films were. This is the worst of the series. It’s watchable, I’ll say that much, but it isn’t very memorable. And, with an unforgettable character like Captain Jack front and center, that’s a major problem.
Pirates of the Caribbean: On Stranger Tides (Two-Disc Blu-ray / DVD Combo in Blu-ray Packaging)