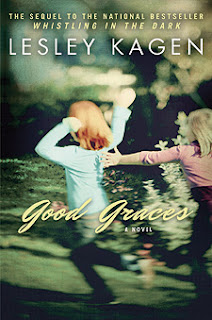 After reading Lasley Kagen’s Whispering in the Dark, I was thrilled to receive her sequel, Good Graces. Kagen’s brilliance in rendering 10 year old Troo and 11 year old Sally O’Malley’s 1960 Milwaukee lives expands as the two girls enter in the world of a very Catholic, very quaint small town life. Kagen extorts every emotion possible as Troo and Sally intertwine with small pranks and high crime in their town.

Sally and Troo are still reeling over their father’s death. Troo feels responsible for the car crash as she and her father were playing a game when the car went out of control. Both girls have had to deal with their mother Helen’s disastrous second marriage to Hall Gustafson, now incarcerated in jail. Helen then moves in with Dave, a detective, and awaits the Pope’s annulment of her marriage to Hall so that she and Dave can marry. Sally and Troo recently found out that Dave is Sally’s biological father. As the heat rises, Sally obsesses on her promise to her dying father: she will take care of Troo. Troo, popping cigarettes and acting out her resentment of Dave, her guilt about her father, and her disgust for her mother, shoplifts and raises hell with everyone she grosses. The girls’ friends Artie (who farts around too much), Wendy – his mongoloid sister, Henry (Sally’s true love), Mrs. Goldman, Mr. Kenfield, Fast Susie, and Ethel (who takes care of Mrs. Galecki) round out the cast of characters.

Throw in Greasy Al Monlinare, who beat Troo up last year and has escaped from reform school, Father Mickey, the evil priest, a few tossed in gangsters, and the poisoning of Mrs. Galecki and Sally and Troo have their hands full. When Ethel, who cares for Mrs. Galecki is called in for questioning, Sally’s life goes on overdrive. And what about Mr. Kenfield’s beloved daughter, Dottie, who disappeared when she found out she was pregnant?


There is more – this novel rocks and rolls its way page after page, less innocent than Scout in To Kill a Mockingbird, but streetwise, Sally has all she can do to set things right for her friends – and save Troo as the novel skips to a delightful ending.

I can’t wait for their next adventure!