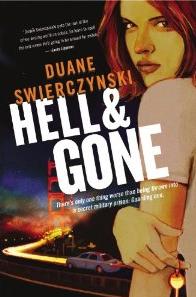 Hell and Gone tilts the slot machine with brutality, violence, sparing plot and dynamic characters. As the coins come tumbling out, Sweirczynski’s characters grab the loot and run.

Hell and Gone’s protagonist, Charlie Hardie, creates a force of character that tornadoes through the atmosphere and funnels into sharp scenes of violence so harsh that readers of this genre will sit up and scream.

Hardie is on the hunt for people called the “Accident People,” a group who kills celebrities and high profilers. The Accident People are led by a fierce assassin, a woman named Mann. While Charlie Hardie, in just another job, house-sits for actress Lane Madden, the AP kill Madden, set Charlie up for the crime, and then kidnap him. Before they get him, Hardie has called Deke, an FBI acquaintance to tell him the Group is planning to kill the Hunter family next. Deke, who half believes Hardie, half hates and half admires him, flies out to check it out – after all, Hardie is as famous in his own way as the killers might be. Might being the operative word – Deke does not quite believe Hardie’s allegations about some wanna be killer group called the Accident People.

Meanwhile, Hardie creates a gap to get the Hunter family to safety. The Hunters operate a Tell the Real Story show of investigative honesty. The Hunters get away, and via webcam, state that the only reason they are alive is – Charlie Hardie. As Deke fights the FBI to find Hardie, he gets resistance – big resistance – and starts to believe that Hardie is telling the truth, and that something big, and ominous, has happened to him. Deke, a loyal FBI man, goes to his boss who tells him to lay off the investigation. Deke quits on the spot. He has to find his man Hardie, and if the FBI is covering something up, then Deke will find him. By himself.

And then Deke picks up the phone. The voice describes the inside of his house, and what his family is doing at the moment, and threatens Deke to back off – or have his house and its family members decimated. Deke backs off.

Injured, Hardie is taken away in an ambulance and then thrust into the trunk of a black Lincoln Town Car filled with medical equipment that will keep him alive – just barely. He has had his short term memory erased and ends up in an underground prison from Hell as – the Warden. As Hardie witnesses the vile way the prisoners are treated and their distrust of each other, with prison guards that resemble Hannibal Lector, he comes face to face with true terror, but he fights back at every turn fast and furiously. There is no way out of Hell – because everyone dies if they try to get out. And Hardie knows if he tries to get out, his family will die. But in Hardie’s mind, no one threatens his family – and lives.


Pop pop, bang bang, this novel shoots fireworks. The violence is brutal, and yet you can’t put this book down. It arrives at supersonic speed with a protagonist that will NOT die, and an evil plot that pushes this novel into a fall and winter steamer. Charlie Hardie leaves us panting for more, as Deke arrives to help, and Hardie catapults the Group into the stratosphere. This thriller will throw you into Horror Heaven.


Beautifully written, gorgeously spun and wound, this is one novel that will thrill the thriller out of you! I loved it, read it twice, and went to bed – with nightmares! But really, readers – it was worth it!