You are here: Home / Fun / DVD Reviews: Kids in the Hall 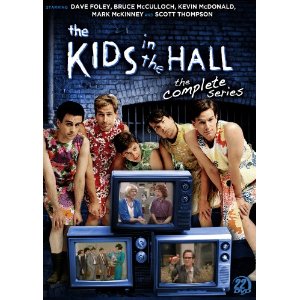 I’ve probably seen every episode of this show’s six-year run, I could probably recite most of the sketches and I keep track of what each of the five from Canada is up to. I started watching this show on very early runs on American television with my father on comedy central and every once and a while after Saturday Night Live if I was lucky. I have run around crushing people’s heads and Buddy Cole.

“The Kids in the Hall” are a sketch comedy troupe, set apart by their cross-dressing antics and seemingly infinite supply of unique characters. Although writer Paul Bellini, various extras, and sometimes even an actual woman appear in the sketches, for the most part, the five main cast members portray every single character themselves. Recurring characters range from the harried corporate executive Danny Husk to Queen Elizabeth, from alienated teen rocker Bobby Tarrance to gay bar owner Buddy Cole, from occult TV show host Simon and his sidekick Hecubus to the gossiping corporate secretaries Cathy and Kathy, and an endless parade of others.

I love this box set. It is completely comprehensive it includes the entire old episodes and has the addition of 2010’s miniseries “Death Comes To Town.” There are 22 discs in total (the 2 extra discs from the previous release are for the miniseries). The packaging is much more refined. Each disc before had it’s own case–here, the seasons are bundled by case so the slipcover houses 6 plastic DVD cases in total.

Death Comes to Town is an entertaining and welcome return. From its opening scenes, in which Death (Mark McKinney) disembarks from a bus in small town Shuckton, we know we’re in for an unconventional miniseries. The show, while always amusing, builds its premise over the episodes and its humor succeeds more and more as the characters are developed. When the mayor of Shuckton is killed, an innocent man is railroaded and the real culprit remains a mystery. Amidst all the turmoil and local politics, we’ve got Death lurking around with a secret agenda of his own. Playing multiple characters, as is their trademark, the Kids acquit themselves nicely. I loved Dave Foley as the mayor’s ambitious widow (a dead ringer for Cybill Shepherd–I swear it even if you think I’m crazy). McKinney is terrific as Death and Foley scores again as the town’s abortionist. By my favorite has got to be Bruce McCulloch’s big city prosecutor. The trial in “Death” is inspired and is successful in skewering both small town mentality and classic courtroom procedurals. And one poor cat will be the sight gag that I remember forever!

I am quite disappointed that this set does not come with their film Brain Candy. I was really hoping to give that another look soon. I guess I’ll just have to netflix it. You will laugh the whole way through starting from the way they look, the way they talk and the topics they raise. It’s hysterical.

is available for purchase on Amazon.com and other DVD retailers.