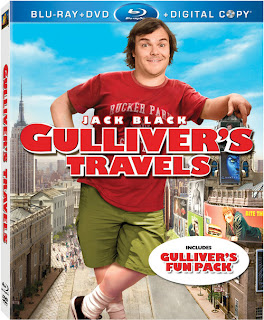 I’ve never been a fan of Jack Black in starring rolls.  I really don’t understand his brand of comedy as a lead.  I think he is a great wacky guy to a straight lead man.  Alas, the wife to be had some young relatives coming by so I found this film to be the perfect fit.  Fart jokes for the kids and maybe an interesting funny spin on the classic novel that I love so much.  The wife to be tagged out on this one and took a nap she had the relatives all morning.  Through my dislike of Mr. Black I was actually kind of excited for this one because everything that Nicholas Stroller (one of the screenwriters) has done has been excellent,and Jason Segel has a direct line to my funny bone.
Gulliver’s Travel’s is the story of Lemuel Gulliver who has been working in the mail room of a New York daily newspaper for the past ten years. Afraid to put himself out there, he considers himself a loser, as do all his peers. One day, after having finally had enough, he decides to declare his flame to the beautiful Darcy Silverman, the newspaper’s travel editor and one of Gulliver’s only friends…only to chicken out at the last minute and instead tell her that he’d like to try his hand at writing a column. Darcy accepts and sends him on an assignment to the Bermuda Triangle. There, Gulliver becomes shipwrecked and ends up on the island of Liliput, where he is twelve taller than the tallest man…hilarity (kind of) and conflict ensue.  Really it’s just a bastardy of a great hilarious story.
I friggen knew it.  Jason Segel killed it.  I really would have enjoyed if the actors had switched seeing Segel as Gulliver and Black as Horatio.  That may have been a real treat but instead we got this movie.  The supporting cast is really excellent here everyone is great.  I really love Chris O’Dowd (this guy is brilliant in everything and has a great beats here as the villain) Billy Connelly, and TJ Miller are wonderful in everything they do and it’s no exception here either.  The female actors are given less to work with but Amanda Peet and Emily Blunt do the best with what little screen time they have.   This brings up the epic disaster that is Jack Black.  The shame is in the fart jokes here.  Jack Black just farts on something or someone and the camera cuts.  This is considered acting.  His acting here is the equivalent of the dog from Air Bud (that may be insulting to air bud).
On another note the resolution here is absolutely amazing.  This flick really looks great its bright and so clean.  The audio is fantastic also.
Special Features:
The Conclusion
Do you want your kids to shut up for about an hour and a half, just put on this movie.  Or if you want to torture yourself for an hour and a half just put in this movie.  This film is an insult to anyone who read this film in middle school and its elementary school humor is insulting.  Go fart on something just not in my living room.
Gulliver’s Travels [Blu-ray]

is available for purchase everywhere DVD’s are sold.
Ratings are based on a 5-star scale

Overall: 1 little person out of 5

Review by Bro “B” – Ben
We received a copy of this title for our book review. All opinions are our own.