You are here: Home / Fun / DVD Reviews: Chronicles of Narnia 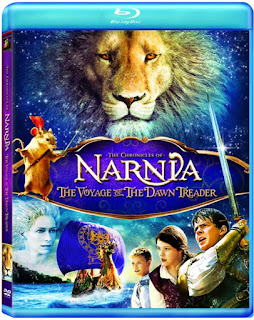 This series just will not die. Even in this episode they take the protagonists to the gates of heaven.  O.K. I’m going to admit it now; I’ve never read the Chronicles of Narnia.  This series had some serious appeal a few years back I remember driving in the middle of a blizzard to catch a screening of The Lion, The Witch and the Wardrobe.  Honestly I really am beginning to realize that this is just a series of recycled plot points from the first few movies.  The wife to be was not interested so I am going at this one alone.
The basic plot runs like this: Lucy and Edmund Pevensie are stranded in Cambridge, living in the house of their obnoxious cousin Eustace, while the grown-ups Susan and Peter are living in the USA with their parents. When a painting of a ship sailing on the sea of Narnia overflows water in their room, Lucy, Edmund and Eustace are transported to the ocean of Narnia and rescued by King Caspian and the crew of the ship The Dawn Treader. Caspian explains that Narnia has been in peace for three years but before he took his throne back, his uncle tried to kill the seven lords of Telmar, who were the closest and most loyal friends of his father. They fled to The Lone Island and no one has ever heard anything about them. Now Caspian is seeking out the lords of Telmar with his Captain Drinian, the rat Reepicheep and his loyal men. Sooner they discover that an evil form of green mist is threatening Narnia and the siblings and their cousin join Caspian in a quest to retrieve the seven swords of the seven lords of Telmar to save Narnia from evil.
The acting in this film is digressing quite a bit however the film looks quite wonderful it is vibrant and exciting looking. I just may be in a bad mood because this is a good film. It has elements for everyone to enjoy, such as clean humor, excitement, dangers and also psychological elements. The plot is straightforward and easy to understand. It is also filled with excitement, especially the battle with the dragon is quite breathtaking. This time, the Pevensies have matured, and hence are a lot less annoying. They even become interesting characters as they battle to overcome their own inadequacies as actors. This subplot is aimed at adults, but it still can be understood by children at face value.
Special Features:
There is a thoughtful audio commentary; you’ll find numerous short featurettes that are worth plowing through at least once.

The “Explore” sections are short clips about each location, and the “Discovery” pieces are brief introductions to the various characters/monsters.

There are also a few “making-of” style shorts, visual FX dissections, and interviews with filmmakers and stars.

A quick aside about the organization of the bonus features: the “extras” tab on the menu leads to a sub-menu where you’ll find a nautical map illustrated with five islands and an icon for the Dawn Treader. Clicking these will take you to additional menus where you can access the individual features. It’s a bit more trouble than it has worth, especially if you’re hunting for a specific featurette, but it’s fairly intuitive to navigate.

Overall:
This is the weakest entry in the series but it’s not the chaotic mess that is Price Caspian.  The film also has dragons, so that’s cool.  Visually its brilliant and the audio is great too fantastic for bluray.  Definitely a rent before the purchase.

is available for purchase at most blu-ray retailers.