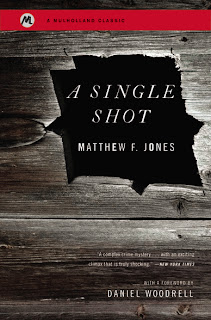 Author: Matthew F Jones
With Hemingway prose and use of the “code” that Hemingway’s characters live by, Matthew Jones succinctly and eloquently portrays the backwoods code through John Moon, a man who finds himself in an impossible situation and attempts to survive it.  Calling forth all the emotional nuances of his solitary, barely surviving characters, Jones portrays them in prose that seers its locale and swarms evocatively around the insinuations of humanity, good versus evil, and that middle field where we most live – survival.  Like Flannery O’Connor, Jones’ talent delivers the core and the façade of the ambivalence of murder, both inadvertent and plotted.  One quick mistake, one quick decision, and Jones ravels us into “A Single Shot,” where we sink, along with John Moon, into survivor’s hell.
An alliance with Flannery O’Connor’s struck down Southern characters pulled along by the fate dealt them; John Moon is a protagonist that shadows the magnificence of writers like Cormac McCarthy.  Stark, pivoting around a fate that falls unbidden into his simple lap, and reaches us to strangle him, John Moon’s chance bad luck drives him from mountain hunter and family man to prey.
While poaching a buck on land that his father lost to the bank, Moon wounds the animal and tracks it into a quarry to put it out of its misery.  He is poaching only because he has to feed his estranged family, as he wants his family back.  He sees a patch of yellow and brown, and shoots.  Then he sees the wounded buck above him and shoots again, killing it.  When he pushes through the brush, he realizes that he has shot a 16 year old girl, who lies dead at his feet.  In the girl’s jacket he finds a note, telling him the girl has run away with her boyfriend.  In her tent he finds a huge stash of money, and wraps it in a bundle.  Without thought, or too much thought, he drags the girl’s body into a deep cavern in the quarry, cuts up some of the venison, a rattlesnake he has shot in the cavern, and leaves.  With the money.
Circuitously, Jones tramps into a rampage with a plot filled with desperadoes, a crippled lawyer, desolation and terror as Moon tries to do the right thing for the wife who has left him and taken his infant son.  This novel proves classic, as Moon’s conscience undulates back and forth as he keeps trying to do the right thing by doing the wrong thing.  The plot surfaces and sinks around Moon, his friend Bledsoe, Waylon, the owner of the money, and various other backwoodsmen maimed by alcoholism, grief, circumstance, and the loss of their manhood and humanity.
I haven’t read a novel this good in years. The writing is exquisite and parallels the landscape, both of the locale and the inner landscape that Mann fights to maintain.  Brilliant and poetic, this is a top read of the year.
A Single Shot

is available for pre-order from Amazon.com.
Ratings are based on a 5-star scale