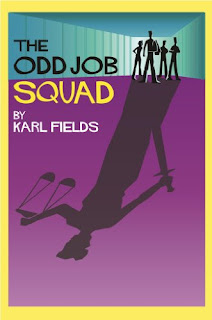 Author: Karl Fields
I haven’t read a book for tweens in a long time that I enjoyed as much as The Odd Job Squad.  Delightful, spot on, with characters that share the difficulty of being on the outs of their peers, but make the best of it, this book is a winner!  All of Fields’ characters glisten and gleam with the shine of real kids in middle school!
At Marine Middle School, Ander Cartwright, Christian, computer geek Joe, and basketball queen Shooter form a club – of sorts.  When kids email them about “incidents” like being bullied of harassed by bullies protected by their popularity, the foursome checks out the veracity of the incident and all four vote on whether to take action – revenge.  The vote must be unanimous, and the “revenge” must match the crime.  With cleverness rather than meanness, the Odd Job Squad does not seek to hurt anyone.  They just want the bullies to feel the humiliation they have imparted on the victims.
There are rules. The retribution cannot be personal, they cannot take on anyone that they have “revenged” before, and no one must know who they are.
As the foursome enact out the “Book of Fair” to their classmates, Marina Middle creates its own chaos.  There’s Stacia, the snotty and mean popular beauty who has it in for Shooter.  There’s Dorsey, the football jerk, who has it in for Ander.  There’s the Barringtons, a popular boy band that all the girls at Marina Middle adore.  And then there are Ander’s Pinks, fortune cookies that Ander cannot live without made by Nick Sunshine at Sunshine Bakery.  When a plot blows up in their faces, the Odd Job Squad fights back – for fair!
Truly enchanting, Fields writes a mean, clean novel about real life in middle school, the bullies, the good guys, and like Amy, the kids just struggling to get through.  And when Stacia discovers that Anders IS the Odd Squad and seeks to blackmail him, Anders learns to grow up.
This is a book to read, not describe.  Hilarious, compassionate, and honest. The Odd Job Squad will leave you – and your child – completely understood.  It brought me back to my days at middle school, where I felt like the odd kid out, and Field’s characters are clever but sweet.
The Odd Job Squad

is available for purchase at Amazon.com and other book retailers.
Ratings are based on a 5-star scale

« Book Reviews & Giveaway: The End of the Wasp Season
Giveaway: Cinderella Story: Once Upon a Song »