You are here: Home / Fun / Books / Book Reviews: A Critical Loss of Balance 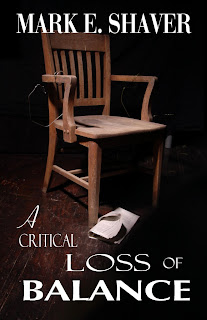 A Critical Loss of Balance loses points in prose and dialogue, while simultaneously presenting a good to very good plot. I took offense at the many times “loss of balance” cropped up in the dialogue – and Shaver’s prose remains stilted and forced at times. His renditions of cops are so stereotypical that it had me laughing. I read to chapter five and was ready to pull out my hair and throw the book in the recycle bin. But to his credit, Shaver goes on and luckily the redundant kidnapping plot finally transformed itself into fast and interesting. His characters, flat and dull in the beginning reach out and grasp us into their minds as they progress, and I found myself actually sad to put the book down.

This said, I think a good editor could have polished this book, which is self published, into a true winner, with less telling and more showing in the dialogue and locale, and I hated all the pre-print grammar errors (although all pre-print novels have them, A Critical Loss of Balance had more), but it is not fair to the author to detract from the review as this is common and is always fixed by final print.

The Scheme: Cliff and Faye’s daughter Lizzie is kidnapped when carjackers ambush Faye and Lizzie on their way to school. Faye gets away, and Lizzie is found in a bizarre manner. Throughout the city, eight wealthy children have been abducted, ransom paid within the hour, and returned to their parents. The ransom amounts are strange, random dollar amounts that make little sense. Lizzie is the anomaly – her parents have no money and few assets. When the police question her, they find out that she was kidnapped to replace a child who died of asthma while the kidnappers had her, and her wealthy parents paid 3 million dollars to release her. When Lizzie was released to the other child’s parents, she was hooded and being the same size and wearing the clothes of the Eddlefield child, her parents handed over the ransom. When Cliff and Faye meet the Eddlefields, Cliff realizes their pain and how much he owes them. And he turns to rage to get his revenge.

Cliff vows to find the kidnappers. Victor, the head of the emergency department at the hospital where the children are taken to make sure they are all right, becomes another part of the scheme. Arthur, a stock broker who finds Faye as she jumps from her car to get away from the carjackers who kidnapped her daughter, becomes another component to the plot. Enter cops, head cop Michael Wheeler who could use some interesting intervention to keep him from telling us how he feels all the time, and his crazy captain Ivan (again, I indulged the author’s lack of nuances in his characters – they are one dimensional) – and Aaron Radcliffe, the mad kidnapper (we are told he is brilliant but never shown why) and his muddled group of low life assistants, and the race is on to find Aaron. As the plot twists this way and that, Cliff joins Aaron’s group of criminals in order to stop him and works with the police and Arthur to catch him at his game. Throw in Aaron’s ledger that he carries on him all the time – it was his father’s who kidnapped children for many years – and you have another caveat. Aaron follows his beloved dad’s formula for kidnapping to get rich.

Lots of great plot, lots of stifling dialogue, but Shaver still keeps his head above water in A Critical Loss of Balance – just barely. The characters did become real and actualized as the novel strode forward. As you can probably tell, I am a stickler for well written novels. A Critical Loss of Balance ended up worth reading, and Shaver might move forward to become the best selling author he will be. Only time – and good editing – will tell.

is available on e-book at Amazon.com