You are here: Home / Fun / Books / Book Reviews & Giveaway: The Taint of Midas 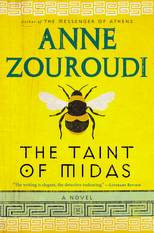 The Taint of Midas

Author: Anne Zouroudi
Spellbinding.  And I do not use the word lightly.  Anne Zouroudi’s “The Taint of Midas – A Seven Deadly Sins Mystery” overcomes her excellent plot and delightful characters with an elegance of prose that undulates and mesmerizes like a spot on sunset.  Simply spellbinding!
This is an author commanding language and plot, very much like Susan Howatch in “The High Flyer.”  Zouroudi spears us into characters that dwell on in our minds and trap us into their every heartbeat.  She intertwines a mystical air into her protagonist, Hermes Diaktoros, who seems a Zeus or Prometheus, only benevolent, the hand of justice in his left palm.  What a talent!
When Hermes Diaktoros returns from his wanderings to the Greek island of Arcadia, where he has one of many homes, he is the first to arrive at the horrible scene of Gabrilis Kaloyeros’ death.  The old man was a beekeeper and an old and beloved friend of Hermes.  Elderly Kaloyeros has been run over by a hit and run driver as he bicycled home with his basket full of watermelons.  Kaloyeros owned the land of the Temple of Arcadia, a place of ancient ruins with a sweeping view of the blue ocean beneath.  Hermes sets out to avenge his friend’s death. Unlike Sherlock Holmes, Hermes Diaktoros absorbs clues without a Watson.  Diaktoros has no need of a bumbling sidekick; his characterization creates the novel’s aura of mystery, light and shadow.  His deductions are based on unorthodox methods and brilliant mentality.
Referred to as “the fat man” throughout the novel, Hermes draws from the townspeople and Constable Petridis and Sergeant Gazis to find the killer.  Petridis and Gazis are uncommon policemen: integrity is their cornerstone.  Hermes stops the murderer as he blackmails Petridis and Gazis.  Underneath the seeming simplicity of murder, the Paliakis family, hated for their greed and viciousness, has set themselves up to absorb Kaloyeros’s valuable land.  They plan to use the land for high end villas because the view from the Temple of Arcadia is one of great beauty, leading directly to the sea.  And in their greed, they attempt to set fire to the land in order to obtain it cheaply.
As Hermes hunts his killer and ponders philosophy, we see Arcadia through his eyes.  Lush, torpid with heat and hate, love and goodness, Hermes plants the seed unbiased justice – and lets it take root. The characters in this novel exceed mortality.  Every character has a cause and effect on the others.  Hermes largesse looms at the center of the novel, but each character forms its own centrality, as Zouroudi’s creates a plot both sinister and sublime.  Like the sea, the townspeople swirl and eddy around Hermes.
This novel rocks.  Anne Zouroudi remains a poet, a philosopher and a writer whose novel confronts the straight line horizon, steps over, and drives us into the bluest sky we can imagine.  I felt deeply disappointed as I came to the end of the novel.  I wanted more, more, more of Hermes, Arcadia, and Zouroudi!  Not a crime novel as much as a lingering look at man, greed, and good versus evil within the context of a most talented writer.  Absolutely stunning!  It made my reading day.

The Taint of Midas: A Novel