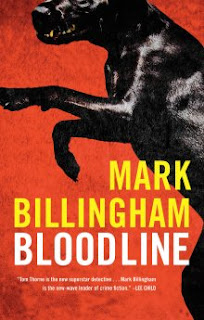 author: Mark Billingham
Bloodline by Mark Billingham provides the best serial killer punch since “The Silence of the Lambs.”  Tight fisted, with characters that lunge in and out of pages packed with plot, sub-plot, and sub-sub-plot, Billingham’s Bloodline reticulates with intelligent characters that take retortion onto a new level!
This thriller spins like a top, revs like a 358, then crashes and mushrooms like a nuclear blast.  Intelligent and searching crime writing at its best.
Detective Inspector Tom Thorne’s girlfriend Louise Porter has just lost their first baby several months into the pregnancy.  Thorne takes on a new murder case, a bad one, party to assuage his guilt, grief and ambivalent feelings of relief at the loss of the baby.  And the case soon spirals out of control.
Phil Hendricks, the forensic medical examiner and Louise and Tom’s best friend, finds the slice of X-ray in the fist of the murdered woman.  She has been hit over the head and has a plastic bag wound around her face and neck, with strangulation as the death verdict.  As Detective Sergeant Holland and Detective Inspector Yvonne Kitson step into the case, more bodies start appearing, murdered in the same grisly way.  All holding X-ray scraps.  When Thorne, Holland, Kitson and Hendricks put all the pieces together, they realize that they have the final X-ray film of Raymond Garvey, a serial killer who died in prison of a frontal lobe brain tumor.  And the detectives soon realize that the serial killer is targeting the CHILDREN of the seven women murdered by Garvey 30 years ago.
Dr. Pavesh Kambar, who performed the operation to remove Garvey’s tumor, unequivocally states that the tumor could not have been the cause of Garvey’s rampage.  But someone out there thinks that Garvey’s tumor created a personality change in Garvey, and that Garvey would not have killed if the tumor had been found earlier and treated.
Thorne’s boss, Det. Chief Inspector Russell Brigstocke has been told to keep the “serial” murders out of the media.  For now, they are touting “unrelated” murders.  Thorne knows, as does Brigstocke, that this will assist the killer in finding the targets.  But their hands are tied.  Thorne fumes, as with photographs in the paper, they would have a chance to find the targeted adult children.  Now, they are just following the killer and sweeping the bodies into the morgue.
Four people on the list are already dead.  Thorne pulls in Carol Chamberlain, recently from the Area Major Review Unit, to find the remaining adult children.  Chamberlain does her job, and they put two of the men in a safe police apartment complex.  The third, a woman named Debbie, will not go into protective custody.  She has a disabled son, Jason, and he cannot tolerate any change in this routine.  Debbie, recently off drugs, and living with a prostitute friend, cannot tolerate change either.  Her friend, Nina Collins, has made Debbie and Jason move in with her, while a 24 hour 2 cop patrol sits outside Collin’s apartment.
Thorne discovers the serial killer is Raymond Garvey’s biological son, who calls himself Anthony Garvey. And the hunt is on.  EXCEPT, Tony Garvey is not only a psychopath, he’s a brilliant one, outsmarting Thorne at every turn.
Ticking like a time bomb, Bloodline proves that an old plot can not only be revised but made brilliant with the right writer and the right plot.  A great read, and one that snaps your head from side to side with every page.
Bloodline (Tom Thorne Novels)

« Book Reviews: Centuries of June
Book Reviews & Giveaway: The End of Everything »