You are here: Home / Fun / DVD Reviews: “61” and When it was a Game
With the baseball season in full swing its time to get into some recent releases about America’s favorite pastime.  I grew up with these two HBO specials, I have seen them one hundred times as a child and teen. But as an adult it’s been years since I had seen either. The wife to be went up to Boston to visit some friends for the weekend so I could break out the baseball movies. When it was A Game, is one of the most rewarding baseball documentaries available.  While 61* brings one of the Yankees’ most memorable seasons and two of the team’s most indispensable players to life, all with the affection and fervor of one of Mantle and Maris’ greatest fans.  Here is the deal, I’m a huge Red Sox fan,  but I really do appreciate the great moments in baseball the Yankee’s have given us like the particular season that Maris and Mantle had. 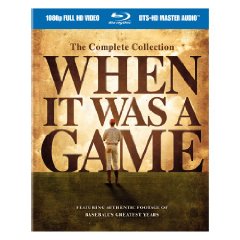 When it Was a Game

is so unique. Narration and audio interviews provide plenty of context, of the documentary about the early years of baseball, but the joy of watching the series is in seeing legends of
the sport as everyday human beings; laughing, crying, gritting their teeth and slapping each other on the back; unaware of the history they’re making with every swing, pitch, home run and broken record. No grand press conferences, no grand jury revelations, no steroid controversies, no multi-million dollar salary disputes, no sweeping organizational buyouts or strikes… just baseball as it was meant to be played, through the eyes of players as they really were, at a time when America was in a constant state of flux. It’s fascinating, honestly, even when it isn’t able to delve as deep or dig as diligently as more sprawling documentary series like Ken Burns’ Baseball. In some ways, When It Was a Game is arguably a more personal production; one that views the sport through a more narrow lens, but manages to tell a more nuanced tale of the very attributes that made baseball everything it was and would become. In the end, though, it serves as an excellent part of a growing history of baseball being assembled by filmmakers, historians and documentarians over the years.

It deserves a place in any baseball fan’s collection. 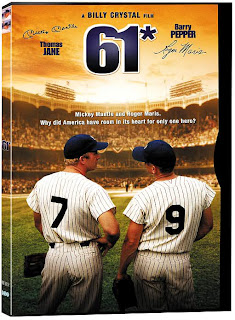 61* does not pull the heart strings or weave melodrama into the fabric of Maris and Mantle’s parallel stories, but  this ends up a noble pursuit that lends a distinct air of period authenticity to the production. That said, 61* isn’t an exhaustive account of the Yankees’ 1961 season either, nor does its focus drift far from Mantle and Maris. The story is a captivating glimpse into the lives of two flawed but decidedly decent human beings caught between the public, the press and their own problems. Mantle, while far more infatuated with the limelight than his soft-spoken teammate, battles not only with a lifestyle of excess, but with all of the trials and tribulations that come with it. Yet he’s still in love with the game that made him a star, making his a especially tragic tale. Meanwhile, Maris, a hard-working recluse ever in Mantle’s shadow, is forced to deal with his own fears and insecurities, contend with combative Yankee fans and maintain a friendship with Mantle, despite whatever faux-rivalry reporters seem intent on creating.

The quality of both of these blu-rays are excellent.  The audio quality is good even if all the sound is up front on when it was a game.  61* sounds brilliant.  The video quality is great they stick to the sources and I saw no tampering.  When it was a game was done with 8mm home recordings so visually there is something left to be desired at the same time it produces a more intimate picture.

When it was a Game: Features not included.

61*: There is an audio commentary that felt a bit too stiff for me and a making of documentary that was fantastic.

Overall both films a must own material for baseball lovers.  They both paint a wonderful portrait of baseball that existed long before I was born.

are available both online at at retail stores nationwide.