You are here: Home / They Read / Book Reviews & Giveaway: The Wreckage 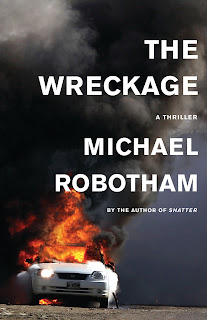 Author: Michael Robotham
The tortured in Baghdad slam out of this novel spearing straight into the slummed guts of war, chaos, and high finance.  The Wreckage chooses its path deliberately, with Michael Robotham controlling the pace, the setting, and tossing out characters that surround us, encircle us, capture us.  And then hold us hostage.  Within a mindmaelstrom of terror and the US bucks funding that terror in the War in Iraq, Robotham proves a worthy challenge in divining some truth amongst fiction.  Terrifying, mesmerizing, and current.
International correspondent Luca Terracine, in Iraq for 6 years, is half Italian, half Iraqi, born in Chicago.  He is in Baghdad chasing a series of bank robberies – 18 in one year – wherein billions of American dollars have been confiscated by the thieves, the banks destroyed.  Luca senses a big story, so he decides to follow the money.
Simultaneously, ex-inspector detective Vincent Ruiz is robbed in London by a young American war hero, Zac, and his slippery girlfriend, actress Holly Knight.  Ruiz’s daughter, Claire, is getting married in a week and Zac and Holly have stolen his dead wife’s jewelry, including her hair clip, a family heirloom meant for Claire on her wedding day.  When Holly and Zac staged a domestic argument in a bar, Ruiz goes to save Holly, and finds himself the victim.  He follows the strange couple, catching Holly as she leaves her apartment.  She is screaming and hysterical, as a man with a gun is in her apartment.  Ruiz goes to save her a second time, and finds Zac, bound to a chair, tortured, mutilated, bloody – and dead.
The tympanic back and forth between Luca and Ruiz drums in a staccato rhythm as the reader concentrates on following the action – hard.  With no room to breathe, Robotham slams the reader’s head against each character’s vignette – and reels them back to the other characters.  Brilliant writing, with just enough leeway to gasp some air and expand the lungs – before the next chapter comes rushing in.
From stage left, Luca gets caught by Iraqi terrorists, Ruiz loses Holly, and Richard North enters from stage right.  North is an upper echelon VP at a global financial powerhouse in London.  He has gone missing.  Turbulence rocks the plane, and the plot sheers star ward..  Keep the seat belts on!
As Ruiz connects the dots, and Luca begins to understand the breadth of the story he is chasing, North becomes the key.  While Luca, a correspondent known for his tendencies to flaunt the rules, follows the money in Iraq to the biggest story of his life (he has already won one Pulitzer, and this story demands more), Ruiz discovers that Holly had a one night stand with North.  Holly and Zac scammed North, stealing something they don’t even know they had, the key to the billions of American dollars flowing from North’s father in law’s bank into Iraq.  And into the hands of some of the biggest terrorists the international community knows about –as well as many that they don’t know about.  Through Syria, Libya, Turkey, the money disappears from the Iraqi banks into the hands of – once, Sadam Hussein – and now, General Muhommad Ibrahim.
Elizabeth North will not allow her husband’s disappearance and throws herself into the fracas.  She cannot understand why no one is trying to find her husband.  She has hired a private detective, who ends up dead.  Why?
Elizabeth’s father is the founder of Fidelity Merser, one of the banks with a branch in Iraq.  And the branch that has allowed robberies of massive amounts of funds.  North worked for Elizabeth’s father as Fidelity’s compliance officer.  Elizabeth must find her husband, as she is about to have their second child.  She and Ruiz form a team, along with Daniela, an accountant performing a US audit on the Iraqi banks that have been robbed.  And Daniela’s boss is right at the top.  The White House.  Daniela and Luca form an alliance – they can’t keep their hands off of each other.
Between a light year dimensional in and out plot similar to Kate Atkinson’s “Started Early, Walked My Dog” (another Mulholland pick!), Robotham’s characters prove more sinister and clever.  Good guy Ruiz shows a singular amount of compassion as he tries to save Holly, and Luca and Daniela present love in the gallows of high crime.
As the world goes, it is Elizabeth’s father who is the mastermind behind the robberies.  He has been laundering the massive amount of American dollars into and under his own bank.  With the CIA undercutting Luca at every step, manipulating the terrorist game of big bucks, people die like sitting ducks. Holly remains herself, an abused, highly intelligent con artist who throws her lot in with Ruiz – and learns men can have compassion as well as brute strength.
Original, dynamic, posturing and thrusting like baboons in heat, The Wreckage brings us in and out of Iraq and its political intrigue.  The war seems to assist the White House politicians who know how to turn the screw, making money out of destruction.  When Robotham throws in 5 or more characters so memorable that we can’t let them recede from out heads, he breaks the bank.  An absolute stunner in every possible way.  Another Mulholland crime genre gem!
A quid pro quo – watch out for the ending.  Family or money?  Throw in murder and which would you pick?
The Wreckage: A Thriller

is available for pre-order on Amazon.com
Ratings are based on a 5-star scale