You are here: Home / They Read / Book Reviews & Giveaway: The Ridge 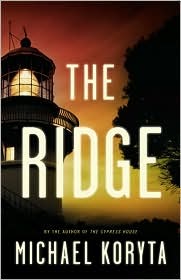 Author: Michael Koryta
Pure Michael Koryta, The Ridge treads into the darkness of evil in the beam of a blue light that hovers around eccentric and alcoholic Wyatt French.  French commits suicide inside his peculiar lighthouse, built in the eastern Kentucky wilderness of Sawyer County on Blade Ridge.  Wyatt French calls two people before he dies.  Deputy Kevin Kimble and Roy Darmus.  Darmus is an ex-staff member of The Sawyer County Sentinel.  The Sentinel has just closed, bought out by a newspaper syndicate.  French’s last call to Roy before French commits suicide inside the lighthouse contains a request, that Roy tell the entire truth about his story.
The previous call, to Deputy Kimble, is more entangled and extraordinary.  French knows that Kimble is on his way to the Kentucky women’s prison for his monthly visit to beautiful Jacqueline Mathis – who shot Kimble in the back at the scene of her murder of her husband.  In the call, French demands to know if suicide is really suicide if someone other than himself compels it.  Kimble tells him to call a suicide line, thinking French is drunk, as usual.
On the back cover of The Ridge, James Patterson remarks:
“A man in love with the woman who shot him.  Who could possibly resist that story?   Not me.  Read on and discover one of the scariest and most touching horror tales in years.”  Well said.
Throw in Audrey Clark and Wes Harrington, and their big cat sanctuary that moves onto the land beside the Ridge, adjacent to the strange lighthouse in the woods, where Wyatt French has just killed himself, and wait for the horror to begin.
When Ira, the only black cougar ever known in existence – in fact, reportedly NOT KNOWN as a species in existence, jumps a 14 foot fence to freedom, he becomes as his name, The Watcher.  Ira will guard against the evil pawned upon his inhuman counterpart, Vesey.
Koryta’s mesmerizing plot tantalizes as it horrifies as the big cats, the leopards, the cougars, Kino the tiger, and Ira scream in rage and anguish as the blue light beckons and shifts its beam around them in the darkness, pointing at French’s deserted lighthouse.  When Wes Harrington and Kino are found dead in Kino’s cage, Harrington holding the tiger’s head in one hand and his rifle in the other, Audrey Clark, Kimble and Darmus begin to unravel the story.  The true story of Wyatt French.
This is not a plot to divulge.  You know who you are – if you’ve read Koryta before, you know genius that creates wells of terror within and around characters that pull us into his story with giant hands.
We can treat this as a chilling allegory for good and evil, Vesey the devil versus Kimble the Christ, or we can meander back into the novel and simply enjoy its narrative.  Koryta performs brilliantly on several levels, but his genre is crime.  The blasts of beamed blue light against the darkness and horror provide us with ample entertainment.  Let’s not ponder rhetoric.  Let’s simply enjoy a plot that sears and sizzles into the metallic gleam of Blade Ridge, Sawyer County, Kentucky.
Another succulent Koryta delieverance.  A maniacal Stephen King could do no better than Koryta’s crisp, taut acrobatic act where horror cuts the line.
The Ridge

is available at bookstores nationally.
Ratings are based on a 5-star scale