You are here: Home / Fun / Books / Book Reviews & Giveaway: Now You See Her 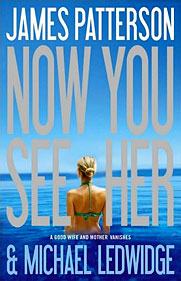 and Along Came a Spider

and your sum total = Now You See Her.  Patterson and Ledwidge indulge themselves in one blast – then two – then three. This novel will knock your proverbial socks off. Maestro Patterson, once again collaborating with Master Ledwidge, travels back down the graveled road to early days, with a thriller that once again ensures his title as The Best!
Nina Bloom is a killer, carries a fake I.D, has changed her name and her life, and yet is a thoroughly good and ethical person. Who’s made a few mistakes.  Haven’t we all?  With the Patterson Twist, she combines all that is human into one complex character.  But Nina is in over her head.  And she knows it.
The Past:
March 12, 1992 – As a senior at U. Florida, young Nina – then known as Jeanine – parties on Key West on spring break with friends, and boyfriend, Alex. She sees Alex and her best friend thoroughly engaged in each others arms, panics in horror, and grabs the keys to Alex’s car, a revved up Camaro Z28 with a 5.7 liter V8 engine.  And Nina is young.  And drunk. Racing down 180 she hits a man.  And kills him. A cop, Pete Fournier turns up at the site of the accident. He looks into Nina’s eyes, and decides to cover it up and let Jeannine go…although Jeannine wants to come clean. But one gaze into his ocean blue eyes and Jeanine turns over her life – to a psychopath, who in her youth and innocence she believes is her savior.  As Jeanine realizes she doesn’t know who Pete is, she finds herself pregnant by a man who murdered Pete’s first wife. Jeannine runs, hitchhiking, and is picked up by the Jump Killer…and escapes.  The Jump Killer is the local serial killer, and Jeannine realizes who he is as she runs.
The Present:
Fast forward to Jeannine’s auspicious future.  In NYC, Jeanine remakes herself into Nina Bloom, a powerful woman who works her way up the ladder as a single mom.  While taking care of Emily singlehandedly, Nina supports them and attends night school.  Through sheer will, she creates herself into a high powered lawyer.  One day, her firm hands her a case that she inadvertently trades with another colleague. The firm is trying to assist convicted death-row convicts, in the case that they are innocent. Nina trades cases to get her death row convict, Justin Harris, off. He’s been incarcerated in jail as the Jump Killer, and from firsthand experience, she knows Justin’s the wrong man.  For she has seen the real Jump Killer – and escaped death.  But she cannot let anyone know, for she is wanted for murder herself – as Jeannine.
As Nina flies to Key West to face her past, and Pete Fournier, she labors over the decision. Peter Fournier is now Key West Chief of Police, and the Jump Killer is still  walking.  AND Nina has her past to hide. As she leaves her beloved teenage daughter Emily, she knows the risks are high, but she’s a good person, and can’t let an innocent man die.
Nina meets with Justin Harris and kicks his lawyer, Charlie Baylor’s drunk behind into gear, and gets Charlie Baylor on board.  Charlie has his own delusional past, as a has been lawyer turned to drink, but Nina chases his fear away and grabs Baylor’s support to get Justin out of jail.  The two lawyers realize they have only five days before Harris dies by lethal dose, and they begin to unravel the story frantically.
Into a labyrinthine plot, Patterson and Ledwidge prove once again that there’s no one out there that can thrust a plot to fruition like this dynamic duo. As Nina chases her ghosts with Charlie Baylor at her side, she comes smack up against the biggest psychopath since Hannibal Lector – Pete Fournier, her ex-husband. With Charlie, Nina’s and Emily’s lives in the balance, Nina’s tightrope taughtens – as she almost falls off the line with no net to save her acrobatic act.  She begins to realize that Fournier is the evil that she and Baylor must catch – and stop – in order to release Justin Harris.  And then the plot twists – again.
Pulsating, visceral, tightly focused and downright mesmerizing, this is one of Patterson’s best. The writing feints and thrusts as Patterson creates characters that spar and box, fall and rise.   Baylor, Nina, Pete Fournier, and Justin Harris – each character fulfills our every emotion, our every need for fast, bodacious drama that keeps turning, spinning like a top! Mickey Haller, move over! The Lincoln Lawyer has met his match – and then some.
Way to go gentlemen! Superb.  The ending?  Eat your heart out!  Hannibal Lector remains the lamb, while Nina Bloom roars like the lion!

is available for PRE-ORDER at Amazon.com