You are here: Home / Fun / DVD Reviews: The Way Back 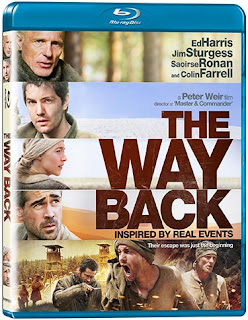 The Way Back [Blu-ray]

I really dig Peter Weir films.  The Last Wave and Witness are two of my absolute favorite film.  He has done so much as a director its really hard to pin down what his thing is.  I know I must go into all of his films with an open mind.  I had not heard about this film before receiving it in the mail.  This bothered me and made me question whether Weir had made a flop.  It could not have been any worse than Whitney Cummings Money Shot.  I had to calm myself and be excited for the journey because it was going to be a long walk…literally.  I also just realized this is an adaptation of novel The Long Walk that was published as a true story but the recanted as false.  This makes the film adaption that much more interesting.  Now I am really excited to watch.

Time for a synopsis!!!

During WWII Janusz, young Polish officer held by Soviets as POW, is interrogated by NKVD. When Russians cannot force him to admit he is a spy, they bring his wife and extort from her a statement condemning Janusz. As a result he is sentenced to 20 years in one of the Gulag forced labour camps deep in Siberia.  At the camp , Janusz meets a bunch of people and they decide to make a crazy escape. He runs away with Mr Smith, Valka, Voss, Tomasz, Zoran, and Kazik during a severe snowstorm in order to cover their tracks.  The 4,000 mile hike takes the men south through the Siberian forests, around Lake Baika —where they’re joined by Irena (Saoirse Ronan), a wandering orphan girl who seems to be lying about her past—into communist-run Mongolia, across the Gobi desert, on to Tibet, and finally through the Himalayas into India. It’s no spoiler to reveal that not everyone makes it. Each change in locale presents new challenges to survival—blinding snow and sub-zero temperatures, treacherous frozen lake crossings and swarms of
mosquitoes, sunburn, swollen feet, and the anxiety of leaving an oasis for the barren, sun-bleached stretch of nothingness that lies ahead.

This movie was fantastic and ranked up there with the David Lean epics.  There were only a few problems with the film it would have been nice to have a bit more conflict among the characters.  This is an artistic liberty that could have been amazing for the drama of the film.  Also we know almost nothing about the characters with they ditch off with a single line of dialogue.  I was really hard to invest in the characters because of this but it still held me.  This is usually my deal breaker.  This time I really did not notice due to the epic nature of the action.  This has nothing to do with the caliber of the acting, which is uniformly excellent. Jim Sturgess seems driven by a deep interior urgency. Colin Farrell relishes playing a madman. And Ed Harris only has to look toward the horizon to provoke emotion.

The end sequence is excruciatingly literal so much so that it almost ruined the film for me.  The film really ties up nicely and enjoyably. The real treat here is the visuals.  This film looks amazing.  The landscapes and shot structuring is among the best I have ever seen. On Blu-The video quality is absolutely  brilliant.  The pacing is really good but still feels short even at two hours and some jingle.  Unfortunately this only contains one special feature, which is a really good making of feature.  I would love to have heard a commentary on this but unfortunately the disk did not contain one.

Overall this film really worked for me despite some nagging problems. While I would not purchase the film I find it to be a fantastic rental.

The Way Back [Blu-ray]

is available both online and Brick & Mortar stores.

Overall: 3 swollen feet out of 5