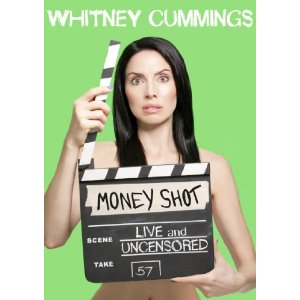 I’ve been a fan of Whitney Cummings from her appearances obn Chelsea Lately and Commedy Central roasts, so I was very excited to see her stand-up routine. Her dark take on celebrity is usually pretty hysterical. Unfortunately, this DVD is not.

I came in expecting hilarious social commentary on Hollywood and her personal life, but got recycled jokes from female comics of the 90’s.

Time for the synopsis…


Whitney Cummings blabs on for an hour and change with her “women do this” routine and “men do that.” She lacks the personal nature and story building that great comediennes have. Basically, she just rattled on about not wanting to have sex ever again. I’m completely at a loss for words. Plus, I don’t know who did her makeup, but she looked like a melting clown as it just ran down her face.


This DVD was supposedly edited down from a three hour stand-up! Who does a three hour stand-up routine? The most that I’ve ever seen (and I go to live performances often) was two hours and THAT was long for a comedian. If I had been in that theater for three hours, it would only have been because I was being held hostage.