You are here: Home / Fun / DVD Reviews: I am Number Four 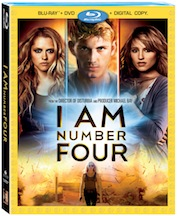 I Am Number Four [Blu-ray]

I really did not know what to expect from this film, these tween action science fiction things can go two directions. The wife to be was also putting up some serious protest upon watching this one. I really did the directors films with the exception of Taking Lives, that movie just seemed lazy. D.J. Caruso is a fantastic director his Salton Sea is an indie classic, with Eagle Eye and Disturbia he completely caught me by surprise. But with this film I did not recognize the cast or the source material so I was a little hesitant. When I heard that it was written by James Frey (well kind of, read up on the controversy here its really interesting) I knew I had to see this film. I popped it in and the wife to be got hooked she could not turn away.
Time for a synopsis!!!
An alien from planet Lorien was sent to Earth as a child alongside eight others to escape an invading race, the Mogadorians, which destroyed their home planet. He is protected by a Warrior/Guardian, Henri, and has developed superpowers due to his extraterrestrial nature, such as enhanced strength, speed and agility, telekinesis, resistance to fire and heat, and the power to generate light from his hands.

The Mogadorians, led by the Commander eventually discover about the nine toddlers and come to Earth in search of them. These Loriens can only be killed in a particular sequence, with three of them having already been slain. John is Number Four. Knowing this, he and Henri move from Florida to Paradise, Ohio, where John befriends conspiracy theorist Sam Goode, a dog named Bernie Kosar, and falls in love with amateur photographer Sarah Hart, whose ex-boyfriend, school athlete Mark James is a bully who often torments both John and Sam.

This film was such standard fare that at first I wanted to puke. Its all high school drama for the first hour, the drama that only took Spiderman fifteen minutes to complete. That changes though when the Loriens and Mogadorians finally, toe-to-toe. With thirty-five minutes left on the clock, Bay (Michael Bay) seems to step in and convince Caruso to let loose and get his gun on. The ‘slpode-y third act that ensues is trashy, energy-blastin’ fun, sure. But it’s decent trashy, energy-blastin’ fun. High-tech weaponry, telekinetic battles, Force-pushing, tragic deaths, betrayals, car-hurling, a pair of giant, four-legged Big Bads (both of which, oddly enough, resemble skinless flying squirrels), carnage courtesy of Number Six, disintegrating corpses, blazing space daggers, bio-shields, fireballs… it’s fairly exciting, in that cartoonish CG, all-ages comicbook sorta way. The wife to be loved the love story and the hunky male lead (when he first stepped on screen she said he’s cute).
This movie looks wonderful. The blu-ray transfer is glorious, although some of the lighting was weak. But the audio was fantastic every -splosion was loud and terrifying.
Special Features:
Over all this film was good. While definitely not for adults due to cardboard acting and story lines this film still entertained me. I don’t know why. But if I were 11 I would have thought this was the best film ever. The wife to be liked it so we also lucked out there.
I Am Number Four [Blu-ray]

Overall: Three beams of light out of five.