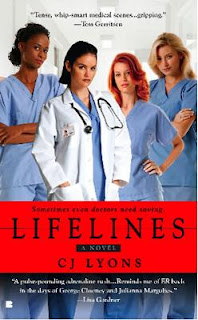 I love an adrenaline rush read, and CJ Lyons does not disappoint. The plot in Lifelines cracks like a bullet from a magnum, with no time for ricochet or false regrets. Lyons keeps us unpaled onto every page, with plot and characters that speed through the sound barrier. She presents real draw, step aside ER and Grey’s Anatomy, there’s a new show in town!

Lifelines, the first novel in CJ Lyons medical drama fiction series, begins on July 1st – “Transition Day” at Pittsburgh’s Angels of Mercy Medical Center. Interns begin their new internships and the hospital ER gets a new attending physician, Dr. Lydia Fiore. But, Dr. Fiore is not your usual new attending doctor. Transplanted from L.A., she has scrabbled her way out of terrifying memories and med school with sheer guts, intelligence and street smarts.  For Lydia comes from a hard scrabble mother who raised her daughter to live on the beach until she was murdered in a church, with 11-year old Lydia listening to every scream as she hid in the confessional. The scars don’t show, for Lydia keeps her cool – no matter what. Until she arrives at Angels of Mercy.

In four days, Lydia’s life turns around. First, Dr. Weiss’s son Jonah dies as she attends to him (on her first day), nd Lydia knows he has been poisoned. But no one believers her, and the M.E. is Jonah’s ex-lover. Instead, she is held under review for mismanaging Jonah’s medicine and care, and Dr. Weiss tries to get her thrown out of the hospital. She meets Trey, a chief paramedic on her first day also, and can’t resist his gentle ways. And then there’s beautiful Amanda, a medical student, Nora, the charge nurse with an attitude and passion for life, and Gina, a no-nonsense resident who charges around like a bull in a china shop. Throw in the “Sons of Adam”, a right wing religious militant group, 5 black women also dead with cyanide poisoning in a church and Lydia’s past – and the whirlwind never stops. The women’s love interests – Trey, Seth, and Jonah prove more magnetic and create more action than a bomb about to explode……oops, 2 bombs about to explode as the hospital staff races to save their patients’ lives and their own.

Lyons writes like a submarine depth chart — fast, on target, and lethal as we run behind her at every page, every plot twist, every romantic shag, and when we finish, we can’t wait for her 2nd novel “Warning Signs.”

can be purchased at bookstores around the country.