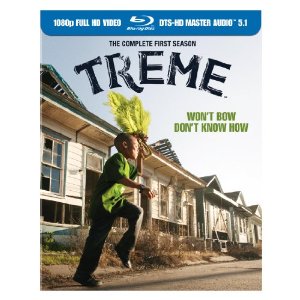 “In America we like to believe if you are not smarter than the next man, if you are not clever or visionary, if you never do build a better mousetrap, then we hold a place for you nonetheless. The myth holds that if you are neither slick nor cunning, yet willing to get up every day and work your ass off and be a citizen and come home and be committed to your family and every other institution you are asked to serve, then there is a portion for you as well. You might not drive a Lexus; you might not eat out every Friday night; your children might not be candidates for early admission at Brown or Harvard; come Sunday, you might not see the game on a wide-screen. But you have a place. And you will not be betrayed.”…”this myth is, in a word, is a lie.”

This quotation was written for David Simon’s previous series the Wire but it definitely applies here too. Treme is a district in New Orleans that was the first area for freed slaves in America. It is also the most epicenter of the modern brass band music and where Jazz was created. I knew the wife to be would not be into this show, Jazz just really isn’t here thing. I had watched a few episode on TV when it aired but I got lazy and did not keep up. So when this came I was really excited, so excited in fact that I watched the entire 10 or so hour season in two sittings. The series begins three months after Hurricane Katrina where the residents of New Orleans, including musicians, chefs, Mardi Gras Indians, and ordinary New Orleanians try to rebuild their lives, their homes and their unique culture in the aftermath of the 2005 hurricane.

There are way too many characters to include in this review, if you have seen the Wire you would understand. There has to be at least a dozen central characters who all get their time to shine. But the plot in this show is completely secondary. Sure, the stories are compelling because the only main character in this show is New Orleans. This show bleeds New Orleans. This show is a song, a second line, or crawfish. This show kind of unapologetic, genuinely character-driven television series viewers are rarely treated to; a show that seems so real and cuts deep. A riveting experience so unshakable that it makes almost all other shows seem positively shallow by comparison. Each of the character’s narratives are loosely woven through each others day to day lives. The show absolutely pulls no punches. Sometimes things don’t workout for the characters sometimes they do. There is one commonality with the characters, they all are New Orleans, they all show at least one thing that is special an unique about the city.

Oh, the music. This is the life and blood of the show. It showcases the music so well each even if it is background music at a bar. Each performance is so entirely prefect that words can not describe. New Orleans staples extend well beyond standard jazz and blues, and the countless genres and sub-genres, new and old, that saturate every tangible and intangible element of the show is showcased alongside the city herself.

And yes I do have one criticism of this blu-ray box set. The definition really goes in and out. When the picture really need to be clean it is, such as when we see the Indian’s and the parade. When there is less visually going on there seemed to be some artifact and color correcting problems. Over all it looked great but from time to time the transfer struggled. But that is completely made up for in the sound presentation. The sound editing on this disk just may be the best I have ever heard since the Paranormal Activity blu-ray.


There are a plethora of commentaries and special features.

Over all this has become one of my favorite series of all time. The music of the show really puts it over the top. All of the acting is fantastic and compelling. It was really tough to say anything bad about the show, but some may find it a bit boring and sad. There are definitely unsettling moments so its not for the faint of heart or children. Treme is the best program currently on TV.

is available for purchase at stores nationwide.