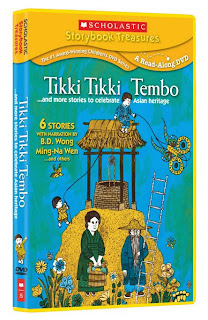 Well, Chang ran as fast as he could and told his mother, but she couldn’t hear him so he had to repeat Tikki’s  name. But mother couldn’t accept the way that Chang said Tikki’s name and he had to take a DEEP BREATH and say that Tikki Tikki Tembo No Sarimbo Hari Kari Bushkie Perry Pem Do Hai Kai Pom Pom Nikki No Meeno Dom Barako had fallen into the well and to get the old man with the ladder. The SAME THING happened and….well, I’ll just let you watch the DVD to figure out what happens to Tikki.

Just know, that from that point on, Chinese families give their children short names.

Also included on this DVD are

Bonus Features:
Read Along Captioning…a great way for young readers to practice reading, just like with the book.

is available online and in toy, book and DVD stores.