You are here: Home / Fun / DVD Reviews: The Scream Trilogy 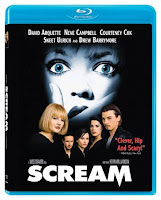 I tortured my family with a copy of this VHS for years.  This may have been 12 year old B’s favorite and the day it came out I had to have watched it like 5 times.  I really dig this flick.  My father had recently begun warping my brain with horror classics such as Alien, Ghost Story, and The Shining.  One of our favorites that came out a few years previous was Army of Darkness which for the first that I had ever seen really blended the irony of horror and comedy while being completely self-aware.  At the same time my future wife was also enjoying these films.  These were horror films for everyone.  This has to be the first major horror film for my generation.  Many have imitated few have gotten the same results. 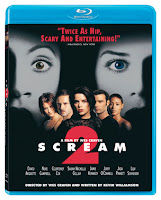 Most of you have probably seen at least one, if not all, of the Scream movies, so a detailed plot recap is most likely unnecessary. Suffice it to say the prelude may be my favorite part of the series, here a major movie star discovers that billing doesn’t protect her from being brutally murdered.  The first film concerns Sidney Prescott One year after the death of her mother, two students turn up gutted. When a serial killer appears, Sidney begins to suspect whether her mother’s death and the two new deaths are related. No one is safe, as the killer begins to pick everyone off one by one. Everyone’s a suspect in this case.  Scream 2 takes place two years later.  Sidney is trying to pull it together at college while Hollywood is making a film based on the events of the first film.  As the film comes close to opening the body count starts to pile back up.  In Scream 3 Sidney is hibernating in the woods, her whereabouts unbeknownst to everyone. After a number of murders that seem to be related to the Woodsboro case take place on the set of Stab 3, Sid comes to Hollywood to be terrorized, find out more about her mother’s death, and put together the final pieces of the Scream mystery. 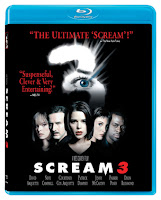 The writing of this film really sets it apart from any other film. You could say that it is sharp (ahhhhh puns).  The first film really shows how fear and laughter are so closely linked.  Everyone sells their parts very well.  I would also go as far to say that the first Scream may still be one of my favorite films of the 90s. While Scream 2 is just good, lots of recycling of jokes and scares but the thing is that supposed to be ironic.  And I really hate the van kill, it just doesn’t work with the character.  The third film of the trilogy is vastly inferior to the previous two…we have hit the law of diminishing returns.  While it is also fun and ironic it just doesn’t work as well as the first two in the series.

Thankfully Lionsgate did a fantastic job with the transfers with these films.  They all look great for their age.  While the first film looks a bit soft it still really is great looking but they sharpen as the films progress.  There is very little digital noise and what is there is not distracting.  I really dig the soundtracks for horror movies because sounds are so deliberately placed to move the audience in a particular way.  They really do a great job with the soundtracks and I really never noticed them for these films before. The third film sounds particularly excellent. 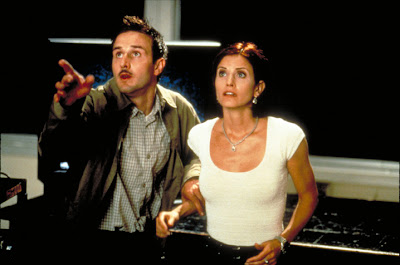 The special features are all captured from the dvd so there is nothing new here except for a trailer for Scream 4 (I am wicked excited, the wife to be and I will be there day one).  This was truly disappointing. I would have loved a cast reunion or a commentary retrospective.


Overall we have one excellent film here, one film that is very good, and one that kind of sucks. Honestly I am very partial due to my history with the series.  These films are all great rainy Sunday watches and they look great on Blu-Ray.

are available in stores nationwide.