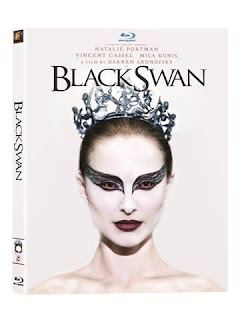 I had been tracking this film’s production since day one. Any film by director Darren Aronofsky is really a treat. Black Swan was really interesting, just a genuinely intelligent genre cerebral work. This film isn’t the first to walk the cinematic line between the obscure and the mainstream, the brain and the primitive. The influence of several predecessors looms shadow-like over Black Swan, from Alfred Hitchcock and Roman Polanski, to David Cronenberg and David Lynch and Dario Argento. My readers know that if I’m comparing this to Roman Polanski (no rape jokes here, this guy is my cinematic hero) that this is no joke. I really had a hard time getting the wife to be to watch this film. I finally cracked her and she even absolutely loved it.

Nina is a ballerina in a New York City ballet company whose life, like all those in her profession, is completely consumed with dance. She lives with her obsessive former ballerina mother Erica who exerts a suffocating control over her. When artistic director Thomas Leroy decides to replace prima ballerina Beth MacIntyre for the opening production of their new season, Swan Lake, Nina is his first choice. But Nina has competition: a new dancer, Lily, who impresses Leroy aswell. Swan Lake requires a dancer who can play both the White Swan with innocence and grace, and the Black Swan, who represents guile and sensuality. Nina fits the White Swan role perfectly but Lily is the personification of the Black Swan. As the two young dancers expand their rivalry into a twisted friendship, Nina begins to get more in touch with her dark side – a recklessness that threatens to destroy her.

It really is not as easy as the synopsis states. It’s just kind of that but really messed up. This is a film that annoying academics will really enjoy as well as burnouts. I am really having trouble explaining how I felt without calling it a Movie cocktail.

Everyone talking about this film emphasizes Portman’s portrait of Nina, while this performance was fantastic it was far from the best of the film. In my mind this film is really owned by the acting of Barbra Hershey and Vincent Cassell. Honestly, I really believe that Hershey deserves all the awards that Portman received. Barbra Hershey’s Erica is that monster of a character everyone loves to hate, and brings a level of intensity to every mere moment she appears in. Vincent Cassell is pure fire in his roll and is dialed back but terrifying at the same time.

I do have some complaints It is all a bit too literal feeling. The CGI in the third act really does nothing for me and it undermines the character’s complexity. Aronofsky uses the old “reflection that moves on its own in the mirror” trick too much. The cheap scares are too weak for this film which also dulls the film’s symbolic use of mirrors, which work with the theme of narcissism among the performers. I really felt some of the symbolism was a bit too heavy handed – every time Nina passes a mirror it laughs at her (this by the end of the film was really making me angry).

Visually the film really does its job. I really enjoy the directors choice to go low-fi with the cameras, the 16mm work here is amazing and I really wish the whole film was shot in 16. I really dug the grainy look for such a gritty story. The 16mm work is sharper than much of the other than I have ever seen.

The special features really kind of suck here. Except for one, there is a making of documentary on here called the Metamorphosis that is really quite amazing. Everything else is standard and not all that insightful.

Overall this was a good film. It’s just not the masterpiece that it really tries to be. The director really comes up short in the maturity department when he went with the symbolism and horror. This film’s true scare was in front of the camera the whole time if the Mother Daughter relationship was explored a bit more it would have been more terrifying than any cheap scare. I really loved the performances in this one and the ballet sequences were wonderful.

is available for purchase at movie retailers.