You are here: Home / Fun / Books / Book Reviews: The Summoner 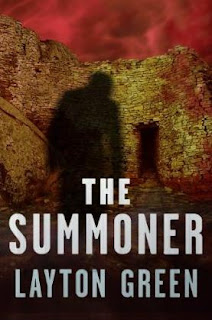 Author: Layton Green
A tale both sordid, regenerating and haunting, The Summoner strikes at the core of good and evil. Set in Zimbabwe, against Africa’s lush palatte and start poverty, the Summoner races into the darkest of realms – that of the Yorubaland Cult of Juju. The Summoner is a translation of The word “N’Anga” – a priest of sorts who summons dead spirits for harm.
William Addison, a retired U. S. Diplomat and close friend of the current American Ambassador in Zimbabwe, disappears. He is last seen by his Zimbabwean girlfriend, Tapiwa (Taps) Chakawa, who accompanied him to a strange and elite native religious ceremony in the back bush. The Deputy director of Diplomatic Security, Harris Powell, calls in Domenic Grey, Diplomatic Security Special Agent, to find William Addison. The U.S. Ambassador pressures Powell to find Addison QUICKLY, and Powell wants no part of it. Blowsy and lazy, Harris Powell is a man who keeps his job by using others to do his work.Although Special Agent Domenic Grey is known as a rogue agent, one who goes his own way, Powell knows Grey is his best chance at finding the missing diplomat.
Grey is assisted by beautiful and cold Nya Mahumba, of the Zimbabwe Minister of Foreign Affairs office (comparable to the U.S. State Department), and Nya pulls in a 7-foot academic, Professor Victor Radek an expert on religions, and cults. Grey carries an abusive and difficult past with him, as he seeks to be a good man in spite of the violence he knows he harbors within. Nya has her own secres, and hidden agenda for finding Addison and the N’Anga. And Radek is familiar with, and intensely curious about the cult, Juju, that carries a history of human and animal sacrifice within it’s secret core. Grey, Nya and Radek discover that Addison disappeared at the altar of a real Juju cult sacrifice, with a babalawo (Juju priest) names N’Anga. Of Nigerian origin, N’Anga seeks evil, for his own power and to practice mind control.
Shot through with mystery and the torrid scent of evil, The Summoner leads Grey, Nya and Radek deeper and deeper into the bush, as they case a strange man who creates a circle of blood, a rising fog, and the utter annihilation of his human victims. Weaving through an ancient and secret cult that entices the poverty ridden people of Zimbabwe into its web, Grey employs the powers of good in Nya and Radek to counteract the N’Anga.
Mystical, complicated, completely believable and terrifying, Layton throws the N’Anga against the beauty of Africa whose people have nothing left to lose. The Summoner presents against the beautiful sunset of Zimbabwe, and Grey’s mesmerizing writing and plot pushes terror against vast beauty. With an ending that will catapult you out of your reading chair, Layton Grey’s novel is a sublime read. Riveting.
The Summoner: (The Dominic Grey Novels) (Volume 1)

is available for purchase at Amazon.com
Ratings are based on a 5-star scale