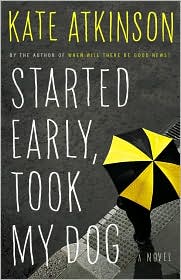 Author: Kate Atkinson
Kate Atkinson’s Started Early, Took My Dog consorts with a weird assortment of people living on the edge of lost and found.  With do-gooder characters that live inside their heads and not-so-do-gooder characters who commit great evil, Atkinson’s newest novel is as edgy as its title.
As Atkinson delves into the lives of ordinary – and not so ordinary – people, she follows them as they trip over abandoned children, embrace the murder of prostitutes in Leeds, London in 1975 in the time of Jack the Ripper, and in the present, adopt abused dogs to go.  Like Peter Pan’s Lost Boys, Atkinson moves into the lost girls, spinning tales within tales in the miasma of the fringes:  Tilly is losing her mind and yet remembers things that speak of life; Tracey is losing her integrity, as she chooses to save a young child; Brody has lost his sister Niamh, as he seeks to find Hope McMasters’s roots, and the only ones “found” are Courtney, Michael Braithwaite and The Ambassador, the dog.
Don’t let Atkinson fool you, however; for within her characters, we find that she plumbs the depths, and brings us back into searing daylight.   Entwined within her staccato language and world of misfits, Atkinson’s characters absorb us, for they are neither quaint nor kindly eccentrics, like Ann Tyler’s protagonists.  On the outer fringes of society, they struggle with lives gone wrong, and losses they cannot contain.  But you have to LOVE Atkinson.  Her distillation of character remains brilliant.  Some of them have moral courage, if not perspicuous lives.  And some of them are heinous.  And then there are the ones in the middle, such as Harry Reynolds, the ex-crime lord who assists when needed in the scene, and Detective Barry Crawford, who seeks redemption.
Tracey Waterhouse, ex-cop, heads Security at the Merrion Center.  She ensures that shoplifters are caught, until she catches herself shoplifting – rather, buying – a prostitute’s child.  And her intentions are only for the good.  As she takes in the depth of her situation, she looks behind her shoulder at her vagrant act, and drags Courtney with her in her fairy princess outfit, dragging behind.
Pivoting around a British sit com called “Collier,” Tilly is an elderly actress caught within the series.  She witnesses Tracey buy Courtney.  Tilly hedges on dementia, but she remembers the child’s screams as her mother, prostitute and drug addict, Kelly Cross, abuses her.  And she sees Courtney walk off with Tracey.
Then there are the two private investigators, Jackson Brody and Brian Jackson.  Brody’s client, Hope McMasters seeks her real parents, as she was adopted as a child.  Brian Jackson’s client Michael Braithwaite, seeks his sister.  Brody, the featured character in the novel, is a loveable and endearing private investigator who fights to find his client’s life, face his losses, listen to Julia, his ex wife, rest his dead sister Niamh’s ashes, and care for The Ambassador, the dog he has rescued.
When Kelly Cross turns up murdered, along with several other prostitutes, Detective Barry Crawford hides the fact that Tracey’s fingerprints are found at the scene, as Barry and Tracey worked together as detectives.  But Tracey isn’t the murderer.
Flashing in and out of time, this novel makes the reader work.  With a cast of characters that defies description, this novel pumps like an oil geyser.  As Barry remembers a previously murdered prostitute, Carol Braithwaite in the Lowell Park murder in the 1970’s, he reveals the evil goings on with three other detectives in his unit:  DC Ray Strickland, Chief Inspector Superintendent Walter Eastman, Rex Marshall and Len Lomax.  Only Lomax and Crawford have survived.  And Lomax is still killing.
With a plot too complicated to detail, I can only say that this is a round robin, with a circularity that stuns.  An absolute thrill ride from page one that creates its own intelligent rung on Dante’s Inferno!
When the hodgepodge collides, characters enter the fray right and left.  Like “Waiting for Godot,” Atkinson creates an existential plot that never confines her characters to stereotype.  Just the opposite – she is one of the most original, creative writers alive today.  If you love the New York Times puzzle, and don’t use pencil, you will adore Atkinson’s compassion, wit and transcendental plot!  Her complications delight and her ending amazes.  Great poignancy, compassion and all out genius in this novel – great book!
Started Early, Took My Dog: A Novel

is available in bookstores everywhere.
Ratings are based on a 5-star scale