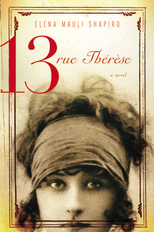 Although very interesting and engaging, about halfway through 13 Rue Therese by Elena Shapiro, I found myself a little annoyed with Trevor Stratton’s imaginings. Trevor is a translator and academic – a professor- from the US, traveling to Paris to work at a French university. The academic secretary at the French university, Josianne, is in the habit of leaving a box of artifacts through the years in one chosen visitor’s file cabinet. This year she chooses Travor, for he has translated the poetry of Paul Valery, a French poet who obscures language even in French. Josianne’s box contains artifacts, letters, and mementos of Louis Brunet, a Parisian from the late 19th and mid-20th century. Josianne acquires the box from her apartment – 13 Rue Therese, where she now lives, in the same apartment that Louise and Henri Brunet lived. Josianne notes that the box of artifacts always returns to her. She places it over the years with a Sarrs historian, a Russian physicist, and now Trevor. And she seduces each one with Louise’s treasures and story. Trevor writes a sequence of letters to an anonymous “SIR” supposedly in the States, crediting it as research, but as Trevor seeks out the stories of the photographs, the scarf, the German bullet pencil holder, and Louise’s life and loves from two waers, he finds himself immersed in her store. Josianne indulges him when he visits her at 13 Rue Therese.

As we become intimately involved with Trevor’s rendition of the life and emotions of Louise through his correspondence with “sir”, Louise reveals her strong sexuality. Her first love, her cousin Camille, died in the Great War. Henri, her current husband is a jewelry maker who works for her beloved father, also a jewelry maker. Louise marries him for safety, not love. With only her doting father as a parent, Louise has lost her mother at birth. he father tells Louise (Louisette, his name for her), that she is enough. He does not remarry. Finding Henri boring, Louise pursues an affair with her also married neighbor in the apartment building, Xavier Langlais. Louise also teaches piano to a 16 year old, Garance Saccard, who amuses herself by emotionally seducing her professors, then dropping them. Louise goes to Catholic confession and makes up stories about raw sexual encounters to scandalize the preists for her amusement.

In a place and time where women’s sexuality is ignored or suppressed, Louise cannot stop her sexuality from running her life.

The day after Louise and Xavier consummate their adulterous affair, Garance, Louise’s young piano student, proclaims her sexual love for Louise. Garance hands Louise a piano composition she has composed for Louise, to express her love for her. Louise realizes she loves Garance, she loves Xavier, and she loves Henri, and also the ghose of Camille.

Ad then there’s another artifact, the key to the farmhouse Henri sold where his mother died. Louise has kept a copy of the key. She takes Henri’s motorcycle and goes to the farmhouse to rest. Others live there now, but they are out of town. As Louise ponders her passionless marriage, her barren marriage (for now she has hope – perhaps Xavier has impregnated her) she justifies her sexual passions and actions.

As Trevor and Louise merge together, we have to question the narrator. But her letters to “sir” are still lucid, we think. As the novel ends, it seems Trevor has sent the letters back to himself. the arrive at Josianne’s desk and she opens them. I have written them for you, states Trevor, declaring his love for Josianne.

Sometimes a trifle muddled, and always startlingly original, 13 Rue Therese follows Trevor Stratton’s rendition of Louise Brunet, in much the manner of Mrs. Dalloway, we realize Louise’s thoughts and life within Trevor’s imagination and letters.


An intriguing and substantial novel, although I did get annoiyed with the “coin” section.

13, rue Thérèse is available for purchase at bookstores.