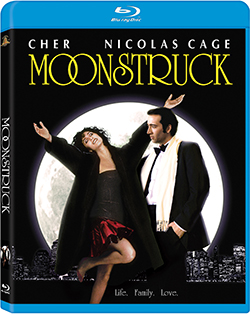 People make fun of me when I say that Nicholas Cage is one of my favorite actors. Even my future wife says that he is purely ridiculous. But, then I start with the defense and it usually begins with Raising Arizona. Now it will start with Moonstruck. I know it’s hard to believe of a classic like this one, I the film geek of Rhode Island, have never seen Moonstruck. Even my wife to be has seen this movie and everyone that I know really loves it. Maybe I was traumatized by the “Turn back Time” music video as a child, I don’t know, but generally I really despise Cher. I suck it up and popped in. Usually I get to a bit of my option before the synopsis but tonight I’m saving it for later.

Loretta Castorini (Cher) is a woman in her late thirties, a widow, who lives with her parents in a duplex apartment in Brooklyn. She is engaged to marry Johnny Cammareri (Danny Aiello), a bland man, more out of a resigned duty than actual love. Before their wedding Johnny takes a trip out to visit his mother who is sick and leaves Loretta the occupation of playing the olive leaf with his brother Ronny by notifying him of their approaching wedding. Ronny (Nicholas Cage) hasn’t forgiven Johnny for being the cause of his accident which caused him the loss of his hand (and subsequently, his then-bride-to-be), but he does fall for Loretta, and hard. After a heated affair Loretta out of respect for Johnny tries to avoid Ronny, but his dark looks and intense manliness win her over. In the meantime, Loretta’s mother Rose Castorini (Olympia Dukakis) is not only suspecting her husband Cosmo (Vincent Gardenia) is seeing another woman, but is also herself the subject of admiration from a college professor and wonders why do men chase women. Things get complicated when Johnny returns from Sicily to tell Loretta they can’t be married.

There are three reasons I completely adore this film Nicholas Cage, Olympia Dukakis, and the script. First the script, The setup is pure sitcom, but the story, written by John Patrick Shanley with a deep understanding for Italian-Americans living in New York, is genuine: he gets the idiosyncrasies of these people and their day-to-day foibles and quirks, and all of the characters have a deep romanticism that comes through in key moments throughout the story. This film could have been a high drama but it was kept so grounded, and it’s really funny. Olympia Dukakis is absolutely brilliant. Olympia Dukakis does a marvelous job as the steadfast, honorable and wise wife and mother, Rose. She completely owns the roll, and it shows that she and her character building really rubbed off on Cher. Nicholas Cage really fired up the screen doing his best to channel Marlon Brando. Honestly, his is over the top in the best way possible in this film, he brings the fire.

I really dig the digital mastering, and was really not expecting the picture quality I had gotten. And there are only a few special features:
I really need to “Snap out of it” and finish this review.

Overall, I enjoyed this film much more than I had ever expected but sometimes you just understand why they popular vote just goes the way that it does. This film is definitely going into my favorite Sunday morning movies, not because it’s a visual masterpiece but because it’s a nice heartwarming picture.

Moonstruck is available wherever DVDs and Blu-Rays are sold.