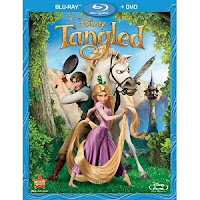 . Ireally was dreading this watch I could not handle putting the smack down on another Disney film. Contrary to popular belief I want to enjoy these movies (except Avatar, but I had my reasons). It doesn’t give me enjoyment to trash a film I just want to watch something enjoyable. Tangled is Disney’s 50th animated feature and it plays better than any since The Lion King

. It has been 70 years since the release of Snow White and the Seven Dwarf

s and about 20 years since a feature (Non-Pixar) has lived up to the Disney Name. Thankfully Tangled does. What took Disney so long to get around to making a movie based around the classic story of Rapunzel? I don’t know but it’s

Time for a synopsis:

After receiving the healing powers from a magical flower, the baby Princess Rapunzel is kidnapped from the palace in the middle of the night by Mother Gothel. Mother Gothel knows that the flower’s magical powers are now growing within the golden hair of Rapunzel, and to stay young, she must lock Rapunzel in her hidden tower. Rapunzel is now a teenager and her hair has grown to a length of 70-feet. The beautiful Rapunzel has been in the tower her entire life, and she is curious of the outside world. One day, the bandit Flynn Ryder scales the tower and is taken captive by Rapunzel. Rapunzel strikes a deal with the charming thief to act as her guide to travel to the place where the floating lights come from that she has seen every year on her birthday. Rapunzel is about to have the most exciting and magnificent journey of her life.

O.K, the first fifteen minutes or so of this film were difficult for me as happy singing really doesn’t do it for me. Sure the film is a bit stale and cliche but I don’t care. After the first fifteen minutes the movie really picked up and got into it’s animal characters which were about 100 times funnier than any of the other characters. Sure the elements of love, adventure, and heart seemed generalized for other Disney films (cough Aladdin cough), but they were working with what had previously worked.


I was pleasantly surprised. Sure, there were slapstick and broad humor sure to make little kiddos laugh. But I was surprised by the sophistication as well. The screwball comedy between the hero and heroine is very well done; adults can appreciate that. The sidekicks, in particular the Maximus and Pascal, are hilarious. These two really carried most of the laughs of the movie for me. Honestly, I think I laughed more at Maximus than I have at any other movie recently. The hero and heroine are very likable and not flat. And there’s a sense of sadness/wistfulness throughout the whole show that the adults will understand. Mandy Moore and Zachary Levi are fantastic as the hero and heroin but Donna Murphy really runs away with any of the songs in the feature.

The features on this disk are kind of light compared to what I am used to with Disney Blu-Ray.

Overall this is my favorite Disney feature in a while that was not made within the Pixar Studio. Cute and light, but the humor of the animal work really put it over the top for me. I really wish I caught this in the theater for the 3D because some of this would have be breathtaking.

will be available beginning March 29th