You are here: Home / Fun / DVD Reviews: Anything Goes 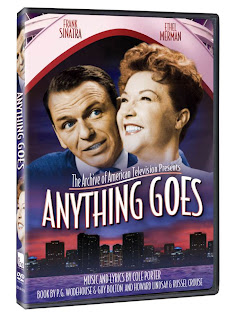 Just nine days after I was born the classic “Anything Goes” made it’s television premiere on The Colgate Comedy Hour.  Set in the 1920’s and originally staged in 1934 (with Ethel Merman), this filmed stage show takes us into the world of flappers, public enemies and bootleggers.

Taking place on a luxury ship, Reno Sweeney (Ethel Merman) sets sail and gives up her life on the stage to settle down and marry a millionaire. Still in love with Harry (Frank Sinatra) a singer who’s disguising himself as a gangster, traveling with a gangster who’s disguised as a minister (Bert Lahr as Public Enemy #13), this story of love, loss and th

With some of Cole Porter’s BEST tunes and lots of toe tapping, this version of “Anything Goes” is a bit different than the original, with a changed plot,  just a handful of the songs, but MOST OF ALL – it’s still got ETHEL MERMAN.

I have to say that I loved it so much that I watched it twice…in a row.  It might sound trite but they don’t make musicals like this anymore.

Whether you just want to hear Ethel Merman and Frank Sinatra belt out some of your favorite Cole Porter tunes, or you’re young enough to have never heard the music of “Anything Goes” this is a special treat that you DON’T want to miss.

“But if baby I’m the bottom, you’re the top”

Thank goodness they found this kinescope under Merman’s bed after she passed away, as this piece of American Theater that would have otherwise been lost.

Special Features include an interview with musical director Buddy Bregman – Mr. Bregman reminisces about writing so much of the music on the cuff, changes that Sinatra asked him to make and more.  After watching the video I started to think that he had to be a teenager when he did this show.


“I get no kick from champagne…mere alcohol doesn’t thrill me at all, cause I get a kick out of you.”

is available on DVD where movies are sold.

Overall: just 5 of those things