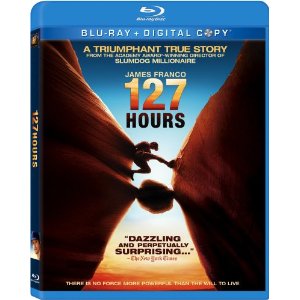 When this film arrived in the mail I felt like an Oscar voter.  I was super excited to see it but a little bit hesitant because of “the scene.”  This scene already lives in infamy, like the scene when the alien pops out of John Hurt’s chest.  Or in the Great Dictator when the Tramp talks, or when Thelma & Louise drive off the cliff. That’s the impact this scene has already had on movie goers.  Luckily, I’m up for anything that James Franco is in, because I know that I will get an interesting perspective (this kid can really do anything), and now he is a local boy (he goes to college at the very close by RISD) I have to support the Rhode Islanders.

When the true story it was based on (I usually hate this term) is actually true, the man this happened to have said “the movie is so factually accurate it is as close to a documentary as you can get and still be a drama.” This both scared and intrigued me.

Now time for another synopsis!

127 Hours is the true story of mountain climber Aron Ralston’s remarkable adventure to save himself after a fallen boulder crashes on his arm and traps him in an isolated canyon in Utah. Over the next five days Ralston examines his life and survives the elements to finally discover he has the courage and the wherewithal to extricate himself by any means necessary, scale a 65 foot wall and hike over eight miles before he can be rescued. Throughout his journey, Ralston recalls friends, lovers, family, and the two hikers he met before his accident. Of course, all of this culminates in Aron’s life-or-death determination to hack off his own arm. The dramatic suspense here is not about what is going to happen—you already know if you kept up with the news in 2003—but when and how and whether or not you’ll be able to sit through it without passing out.

This is easily Franco’s best performance to date, well worthy of the Oscar nomination he received for it this year. He carries the film, not smoothly—that would probably be boring—but with substantial determination, personifying the dichotomy that describes Aron Ralston. On one side, Aron is high off of life, a captivating charmer who gets his kicks trekking off into the rough country alone. On the other, he’s thoughtless, spontaneous, and arrogant—at 28, the reflecting invincibility of adolescence has yet to wear off.  Franco kills all of these traits making it one of this year’s best performances. I was hoping for some real footage from Aron Ralston’s adventure but I can understand why Ralston wouldn’t want to make that material public.

Still, there are some great supplements on this disc, especially the audio commentary and making-of documentary.

Overall this was an excellent watch.  I really enjoyed it although this is not my favorite film by Franco or Boyle.  I should not have gone into the film with such high expectations