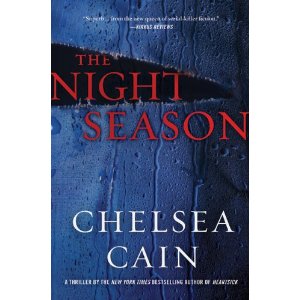 Author: Chelsea Cain
Rapid fire, with a full clip, The Night Season hammers from page one.
Just coming off torture from serial killer Gretchen Lowell, called the Beauty Killer, Portland police detective Archie Sheridan doesn’t notice his scarred body anymore, and ignores the pain.  Sheridan is back in Portland, out of the psych ward where Gretchen landed him – before he put her in prison for good.  And now he’s on the trail of Poison Pal, another serial killer who poisons and then throws his victims into the Willamette River, already overflowing with tidal rains and winter snow drainage.  Sheridan’s partner, Henry, has just become Victim #4.  Henry has been rushed to the ER, barely alive.  Archie, in the same hospital, just rescued a child from the broiling river, and suffers from hypothermia.  Reporter Susan Ward, a friend of Archie’s, witnessed the rescue of the child, and then — found Henry.  Claire, part of the Portland police team, was with her as Susan gave Henry CPR, just before the paramedics arrived.  They have discovered that the other victims have been poisoned also, but they do not know the toxin.  They all sit by Archie’s bed, waiting for Henry to come out of the coma.
The Night Season takes the reader and holds with a death grip.  We race to catch up with the fast and furious pace of the novel.  Chelsea Cain’s superb 150 mph prose slams us into the seat of her novel, and snaps the seat belt as we fly over the cliff.  Prepare for the crime novel ride of your life, readers!
At the hospital, Susan, Claire and Archie are joined by the Portland ME (medical examiner) Lorenzo Robbins and Portland Chief of Police Robert Eaton.  Archie lies under a thermal blanket.  As the others leave, Susan, Claire and Archie hear Code Blue – in Henry’s room.  Henry is defibbed for the third and final time.
More murders.  A small black key is found with the bodies.  Susan discovers the same key in her purse.  And the victims, including the National Guardsman, Carter, who helped Archie rescue the little boy, are all poisoned then dumped in the gouging river.  The child is Patrick Lifton, who walks out of the hospital alone.  Patrick has been held hostage by Roy McBee, the Poison Pal, for a year and a half.  Roy kills by octopus, the blue ringed octopus, a creature with one of the most fatal venoms in the world, with no antidote.  But now that they know what they are fighting, Claire, Susan and Archie wait.  For Henry will either make it or not in the first 24 hours.  He has come out of the Code Blue breathing.
As Susan, Archie and Claire work the case with a frenzy devoted only to the maniacal; they keep vigil at Henry’s bedside.
This is my first Chelsea Cain experience, and its tick tock brilliance settles like a buoy on the rising waters of the Willamette, which is now threatening to flood the entire town.  Complicated, feral and fantastic, The Night Season shines its light without waver.
This is NOT a crime novel to MISS.  This is a crime novel that boils with the fury and magnificence of a river enraged and engorged and characters that slam dunk every scene.  Awesome.
The Night Season

is available at bookstores everywhere.
Ratings are based on a 5-star scale