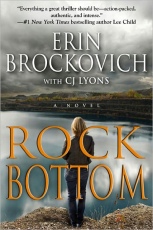 Erin Brockovich defies description. Or explanation. Like Jan Schlichtman in “A Civil Action”, Brockovich lays her belief system – and acts on it. She is you – and she is me – if we have the personal courage to pursue the action of defending our own.

In Rock Bottom, her debut novel, Brockovich (and C.J. Lyons) prove a new talent. In this tale of a small mining town in Scotia, West Virginia (pop 847) held captive by the rich and powerful mine owners, the Masterson family, Brockovich reaches inward and pulls out Cody Masterson, who defies his family. Out of her magician’s hat, comes her lovely protagonist, autobiographical AJ Palladian. AJ comes from Scotia, from one of the desperate mining families living on the fringe of the Masterson control. Living in the shadow of a dead brother, and with a 9 year old son to support, she returns home after 10 years of trying to make it on her own with a disabled but brilliant child. She has accepted a position with activist Zachariah Hardy, and she finds on her return that he has died. She meets Elizabeth, his daughter at Hardy’s funeral and saves Elizabeth from the swarm of reporters and takes her home. They find they are mirror images: Elizabeth has never had the attention of her father, and AJ has been spurned as the daughter that should have died instead of her brother. The tale produces tension as the father-daughter dynamics are healed, and as AJ and Elizabeth mature and become friends – and partners in finishing Zachariah’s attempt at saving Scotia from the destruction of the top mountain mining that the Masterons are attempting. They are trying to save the people – the Mastersons methods are contaminating the land and the water – and the mountains, which they love.


Harsh, sensual, uplifting, ephemeral, stark – the novel poets the mountain and the land against the actions of the characters brilliantly. A beautiful novel, a beautiful protagonist, full of loss, home, family and joy, Brockovich sears across the page like a winter mountain storm.

“Erin is inspiring and I know the world to be a better place because she is in it,” states actress Julia Roberts. But can she write? The genre of fiction furthers that statement. We are better people for having read Rock Bottom. I have a feeling that Brockvich’s courage and personal integrity create a voice that will be heard and revered as she continues her writing career.

Fast, intriguing and full of environmental concerns, while supporting a love story of friendship and a love between Cody and AJ and AJ’s son that rocks us into the cradle. Lovely.

is available for purchase at Amazon.com and other book retailers.