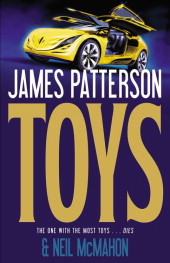 Authors: James Patterson and Neil McMahon
Titillating and tympanic, Toys inhabits the realm of reality, the surreal, and the Orwellian.  Fusing Darwinian evolution with über technology that overrules genetics and DNA, Patterson and McMahon’s new thriller targets what might easily become reality – tomorrow.  Technologically enhanced, there is a new being running around Earth – the Elites – and humans are the debris that they trample upon.  Since 7-4 Day, when the human race almost decimated itself, the Elites, part human and part technology, own the world.
Hays Baker and his wife, Lizbeth, work for the Elite Agency of Change, the military machine of the long arm of the Elite Corps of techno humans.  As Elites, they inhabit the spacious Diaspora of the New Earth.  And they are on top.  Physically and mentally enhanced, they are in a war against the maniacal humans who tried to destroy the Earth that the Elites uphold.
At President Hughes Jacklin’s inaugural party, Hays and Lizbeth Baker are celebrated for their last successful mission in the West, winning against terrorist human bank robbers.  As the Bakers hold their champagne glasses high, they are asked if they would like to meet President Jacklin.  The President adores Lizbeth on sight, for she and Hays are exceptionally aesthetic in the looks department.  As they meet, the President requests Hay’s assistance in the first mission on Jacklin’s agenda as President – to finally exterminate all humans from Earth.
Hays, excited and honored, greedily accepts the challenge.  On their way home, he and Lizbeth are accosted by a band of despicable humans, and Hays ends up injured.  At the hospital, he awakes in cuffs and restraints with the sound “HUMAN” echoing in his ears.  Is he hallucinating?  Dreaming?  It seems that Hays is one of the Despised in spite of his enhancements – and he barely escapes with his life.  Lizbeth’s reaction to the news is to instantly betray him.
As Hays runs, he escapes to his parents’ home.  It is there he learns the truth.  His parents are exceptionally brilliant human scientists, who technologically enhanced Hays and his sister Lucy when they were children.  Hays did not even know he had a sister, and when he meets Lucy, he gasps.  She is one of the human despicables who had attacked him.  And now she is kin.  When the Elites barrage the Baker complex, his parents are murdered, and he and Lucy are on the lam.  As they fight side by side, they earn each other’s respect, for Lucy is as brilliant as Hays – and even more accomplished.
This novel is not Tick Tock – for Tick Tock features Patterson’s brilliance in his traditional crime genre.  What I love about James Patterson is his ability to constantly recreate himself, to enter into any genre, crack the eggshell, and present the audacity and style to risk new characters, new patterns, and to jump outside his comfort zone.  As the number one author in the United States and Europe, Patterson could rest on his laurels.  But he never does. Toys employs the same staccato chapters, the same shutter click suspense, the same ability to forge characters that swoon with action and integrity, and yet it presents an amazingly different palette from his usual.
As Hays and Lucy join the underground forces of humans both brilliant and courageous, they meet the leaders of all the free countries of humanity.  For everything he has learned as an Elite is erroneous.  The Elites are not only cruel, their version of history is a lie.  Europe swoons with leaders both crafty and sworn to save their race from the arrogant, emotionless machines that the Elite have become.
As the plot inverts itself, and Lizbeth and the Elite forces counter Hays’ reality, Patterson swarms his novel with stealth and the honor of humanity.  And what a bee’s nest of a read it is!
Fast, furious, and fantastical, Patterson sets us on the cusp of the edge of the Earth – and shoves us over!  Parachutes, anyone?
Toys

is available for pre-order on Amazon.com and will be available at bookstores beginning March 14, 2011
Ratings are based on a 5-star scale