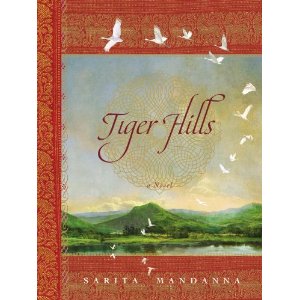 Author: Sarita Mandanna
A poetic moment in time and locale, Tiger Hills’ lush sentences, and pregnant paragraphs create an offspring of characters memorialized within the opulent beauty and drama of colonial India.  Searing heat laced with icy tenderness and brutality, Sarita Mandanna’s novel soars onto a horizon that holds beautiful imagery.  The heron that announces the events in Devi’s birth and her children’s lives live alongside the rare bamboo flower, to taunt this sweeping flight across the forests of Coorg, India.
Beautiful and spoiled Devi is born into a family of sons; she is the only girl to be born in decades.  Her family dotes on her.  Brainy and quiet Devanna, whose mother has killed herself, is adopted by Devi’s family, as his clan and Devi’s clan are closely related. And Devi and Devanna are inseparable, childhood friends, and soulmates.  Both come from prestigious clans of the Coorg tribal Indian bloodlines. Enter Machu, the son of Devanna’s tribal patriarch, and the only Indian in 30 years to have killed a tiger with a blade and his bare hands.  When Devi is ten, she and Devanna attend the “tiger wedding,” a celebration of Machu’s bravery and uniqueness to the clan as the tiger killer.  Devi falls deeply in love with Machu and swears he will be her husband.  While Devanna’s love for Devi is deep, Devi must have her way.
Devanna has an intelligence that far exceeds others.  He meets a mentor, the strange Reverend Gundert, who teaches Devanna botany.  Devanna and Gundert seek a new species of botanical plant, a strange bamboo strain that flowers only once a year, creating a bloom with the span of a hand, with riotous and flagrant colors and scent.
Reverend Gundert insists that Devi go away to a special school for boys, where he will obtain the education worthy of him.  At the school, Devi is tortured and brutalized by a boy who hates.  The gang of older students kills his pet squirrel, given to him by Devi; give Devi a concussion as they beat him. Devi runs away, with both a concussion and drunk.  As he comes upon Devanna in the green fields, he rapes her in his anguish and love for her.  For he thinks Devi loves him back.  The triangle ruins their lives when Devanna tells his mentor, Reverend Gundert, and the Reverend disowns him.  The tale spirals into devastation into the generations to come, as Devi has promised herself to Machu and her parents make her marry Devi without allowing her to reach Machu to explain.  When Machu asks Devi why she has disavowed him, she refuses to answer in her deep shame and hate for Devi.  When Devi’s and Devanna’s child Nanju is born, Devanna sees only the rape in Nanju’s baby innocence.  Devi’s rage overtakes her entire life, as she ignores Devi completely.  Devi tries to make amends by taking care of Devanna, and Nanju and by giving Devi everything he can, but Devi has made up her mind.
Devanna seeks the quiet life of his garden, which he plants into grandeur for Devi.  He asks his sons and the village boys to seek his bamboo flower, for he must receive Gundert’s forgiveness as he cannot achieve Devi’s forgiveness.  Gundert shuns him for the rest of his life, but rewards Devanna at the end of the novel.  The theme of forgiveness proudly struts into the fiber of this novel, and Mandanna creates an exquisite collage as she brings the circularity back to the family.
Machu marries, joins the service, and dies.  He has a child with his wife named Appu.  Devi arranges to buy Appu from his mother who cannot support him, and Appu becomes the apple of her eye, as she ignores Nanju and makes Appu her first son.  Devanna tries to mediate, but his grief and shame along with his love for Devi make him cater to her every desire.  Appu becomes the point of destruction for his family, as he grows up as a self centered, irresponsible man, much like Devi herself.
Devi has been given Machu’s inheritance as he dies, and with the lands she creates tobacco plantations that make her fortune.  When she almost loses her land, Devi brings his own inheritance into her hands.
As the boys grow, Devi makes it plain that she intends to leave the home plantation, Tiger Hills to Appu, instead of her first son, Nanju.  And Nanju finally breaks, leaving the family home to die in a fatal accident.  Devi is heartbroken, and as the novel leans toward the ending, she forgives Devanna and Nanju, who has faked his death, returns home.
A novel driven with the restlessness of the jungle, the pride of the Coorg tribe, the necessity of family and forgiveness, and the British influence upon their country, Devi and Devanna’s tale is one of strife and great beauty.  A novel that stands alone in its tempestuous characters, its entrails of tiger killers, and with writing and scenery that create a breathless reading experience, Tiger Hills strikes to the heart.  This is an eloquent novel, placed within a time and place that sears itself into the locale and a people, proud and poignant.  As the herons  announce Nanju’s arrival home, Devi and Devanna reunite.
Tiger Hills