You are here: Home / Fun / Books / Book Reviews & Giveaway: The Terror of Living 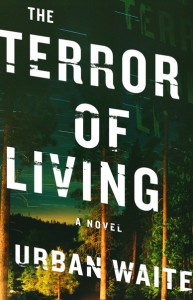 The Terror of Living
Author: Urban Waite
My first thought when I read this novel was – hmmm, Cormac McCarthy’s No Country for Old Men Wannabe.  Then I started looking at other reviews because I seldom review ANY book I don’t like – and I saw that others had the same feeling.  So no, I did not check out any reviews – and never do – before writing my own.  BUT I DO read Cormac McCarthy and I just could not BELIEVE that Waite would think that The Terror of Living was ORIGINAL in any way, shape or form.  That said, many fine reviewers have given The Terror of Living a 2 thumbs up.

Usually I just don’t review a book that does not connect for me.  However, as I meandered through the characters in The Terror of Living, I felt like sediment sludging quickly down beneath the current, sitting on the bottom and remaining, well, sludge-like. Phil Hunt and his wife Nora live on the fringes in Washington State, with everything falling apart.  Hunt, who killed a man years ago and went to prison for it, now owns a patchy, weedy, horse farm with 2 horses of his own (his and Nora’s “kids”).  They also board other horses.  He and Nora eke out a living – barely.  To get by, Hunt occasionally runs drugs through the mountain passes.

Phil Drake, a deputy, also has a wife, Sheri.  They are newlyweds.  He falls into Hunt and a kid picking up a drug drop as the helicopter skews away, and shoots Hunt’s horse out from under him.  The kid with Hunt is caught, and killed, in the holding cell where he has been brought for questioning.  Drake unwilling teams up with DEA Agent Driscoll to find Hunt.  Drake knows a little about running drugs.  His father, a former lawman, is in jail because he ran drugs in his own time.  The rift between Drake and his father remains unresolved.

Enter Grady, a hit man working for The Lawyer, who coordinates for the big drug dealers and runs their show.  Grady, sent to kill Hunt and the Vietnamese girl carrying the drug load in her belly, rages when Hunt and the girl escape due to a Coast Guard intervention.  Hunt, whose best friend Eddie is in on the deals, betrays him, although he worries about Nora.  Grady escapes the Coast Guard and starts destroying gas stations and other properties as he hunts Hunt.

When I read that Urban Waite studied at Emerson College, I raised an eyebrow, as that was my graduate school for creative writing.  But it took mud boots for me to wade to the end of this novel, and even then, I got wet.  My terror was of getting even more bored than I already was.

The Terror of Living will appeal to many readers, for the prose is catching, the locale is lush, and the characters seem to own their ambivalence and feelings; and Waite has been thrown many good reviews.  My take was a drug deal gone wrong, with me having to finish a novel that proved somewhat stereotypical and contrived.  Maybe I was expecting “Brokeback Mountain;” at any rate, I don’t handle mediocrity well, and I the novel simply did not appeal to me.

The Terror of Living: A Novel

is available at bookstores and online.