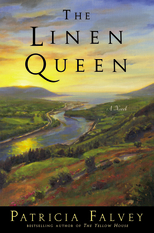 The Linen Queen
Author: Patricia Falvey
The Linen Queen by Patricia Falvey reverberates with the same Irish poignancy and longing as her debut novel, “The Yellow House.”  And her second novel presents Ireland in the 1940’s with the same delightful voice and poignant characters that create a new meaning for the word survival.  Painstakingly stark and remarkably resilient, Northern Ireland’s Sheila McGee mirrors Ireland’s inner and outer turmoil
Sheila McGee lost her father when she was ten.  He left because he could not live with her angry, bitter mother any longer, and died on the sea where he made his living as a fisherman.  He called Sheila his little merrow, his mermaid.  Left with a mother so self absorbed that she can do nothing but demand that Sheila take care of her, Sheila’s only friend is Gavin.  Gavin also lost his father to the sea.
Sheila works at the Queensborough Spinning Mill in a small town in Northern Ireland.  Her looks create some kind of life for her, and Sheila uses them to her advantage.  But nothing spares her of her bitter tongue.  All Sheila wants is to escape from her mother, from Queensborough, and from her life.  Her Aunt Kate, and Uncle Kevin, a raging drunk, own their own house, and take Sheila and her mother in.  When Uncle Kevin tries to rape her, Sheila learns how to avoid him and fend for herself.  No one will take advantage of Sheila McGee.  She learns to rely only on herself, and to not care about anyone or anything.  Her wild and spoiled ways keep her safe – and almost friendless.
In 1941, the Linen Queen pageant is being held in Queensborough for the first time.  Sheila is chosen as one of the entrants in the name of her spinning mill.  When she wins and receives the 200 pound prize, she sets her sights to London.  But because of the war, she cannot get the papers necessary to leave.
When the Allies come to town, Sheila attracts Captain Joel Solomon, a Jewish American officer.  She wants Joel to take her to England with him, although she doesn’t love him.  For Sheila isn’t capable of love.  Gavin, who loves her deeply, watches as Sheila traps Joel and flaunts herself before the town.  Aunt Kate and Uncle Kevin have taken in a 13 year old Belfast evacuee named Grainne Mallory, and Sheila finds herself jealous of the child.  When Uncle Kevin brutally rapes Grainne, Aunt Kate sends Grainne to the worst possible fate.  She is sent to the convent, where people go mad and where no one ever escapes.  Somehow, Sheila feels responsible.
Gavin pulls in the IRA to get Grainne out, and finds Sheila and Grainne a home with a nice woman.  Patsy, a friend of Sheila’s who become pregnant from her American soldier, is taken in by Sheila also.
As the war rages, Sheila finds herself changing.  Joel asks her to accompany him to England, and Sheila tells him the truth.  She has just been using him.  Joel leaves, on a mission to help the Allies – D-Day.  Gavin is blackmailed by the IRA toughies.  They will leave Sheila and Grainne alone if Gavin helps them smuggle in arms to fight the British and help the Germans.  And finally, the IRA demands that Gavin use his ship to take German POW’s back to Germany.  Gavin’s ship is destroyed by torpedo gun.  Joel dies rescuing his soldiers on the beaches of France.  Sheils is overwrought with grief and loss.
As we watch Sheila transform from a selfish, shallow survivor into someone with empathy and deep emotion, we feel her losses.  When Gavin returns, he is an Irish hero.   He was at the beaches along with the Allies returning the German POW’s to the Allies.  He and Sheila realize their gratitude, and love for each other.
Lush scenes, filled with all the emotions of a war that beckons with no horizon in sight, this novel creates its own Irish lilt through Sheila McGee.  Lovingly written, and just as poignant as “The Yellow House.”
The Linen Queen: A Novel

can be purchased at Amazon.com and other fine booksellers.
Ratings are based on a 5-star scale