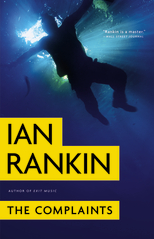 When it comes to surreptitious, there’s no mystery writer better than Ian Rankin. Cryptic, caustic and cautious, Malcolm Fox works as a detective in the Professional Standards Unit of Complaints and Conduct in Edinburgh, Scotland. The C&C is the internal affairs division of Lotham & Brothers Police HQ on Fettes Avenue. Malcolm and his small staff, detectives Joe Naysmith and Tony Kaye, pursue a hot case – Glen Heaton, a fellow cop, has been on the graft – and is up for trial due to Fox’s investigation. Heaton’s boss, CID Billie Giles, vows revenge on Fox, and when Fox’s sister, Jude, falls into trouble, Giles plays a deadly game of switch and bait on Fox. Jude’s partner, a construction worker who abuses Jude, has been found brutally killed, two days after he broke Jude’s arm. Fox has placed his father Mitch in a nursing home, and Malcolm Fox, Mitch and Jude try to recover from the brutal death. Mitch ignores, Jude cries, and Fox pulls in his forces to find the killer.

Simultaneously, the Division next to C&C, called CEOP (Child Exploitation and Online Protection) investigates another of Gile’s men, cop Jamie Breck. Detective Annie Inglis pulls Malcolm Fox into the surveillance – Jamie’s credit card has been charged for services from an Australian website that partners pedophiles with boys.

As Jamie Beck is the detective in charge of Vinnie’s murder investigation, he and Malcolm find themselves strange bedfellows, and Jamie and Malcolm form an alliance as they both have reason to suspect that Vinnie’s murder is tied to two high flyer murders. Charlie Brogan and Philip Norquay, big time developers have seemingly both committed suicide. Brogan’s body has yet to be found – he jumped off his yacht. As Fox and Breck dig further, they discover that Brogan’s wife is Joanna Broughton, owner of a local casino. Joanna’s father is Jack Broughton, a mob type in his seventies who owns a large part of Edinburgh. Neither Brogan nor Norquay have been described as men who would commit suicide, although both were hemorrhaging money on development sites gone bad.

With nothing as it seems, Fox and Breck take a huge risk and pull in Chief Detective Stoddart, who overlooks the investigation that targets both men. As they talk, she listens, and gives pause. But Malcolm and Breck don’t know who is boffing whom in their own Complaints and Conduct division, the other stations or at Boss Headquarters. And as they spin the bottle, it points directly to Charlie Brogan, alive and hiding out from his cohorts. He confesses to sending Vinnie to his death at the hands of Vass Tanner, who works for Bull Wauchope.

With the cards on the table, Fox and Breck face Wauchope and trick Wauchope into a confession, and demand Tanner’s death.

The tornado swirls to an end, and the debris left behind leaves Jamie Breck and Malcolm Fox stepping over it, while watching all the bad guys fall into the gutter.

will be available for purchase on March 7, 2011